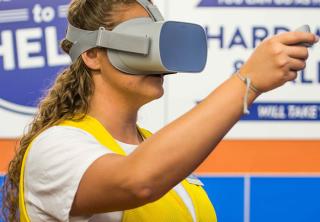 Walmart is embracing virtual reality in a big way.

In October, the discount giant will launch VR-based employee training at store-level. Walmart will send four Oculus Go VR headsets to every Walmart supercenter, and two units to every Neighborhood Market and discount store in the United States. By the end of 2018, there will be 17,000 headsets available at store-level, a move that will give more than one million Walmart associates access to virtual learning, according to “Walmart Today,” a blog on Walmart’s website.

Employees will use the headsets to access more than 45 activity-based modules developed by STRIVR. The platform delivers realistic, repeatable and scalable training content, which helps associates learn information more quickly and retain it better. The VR training program will focus on teaching employees about new technology, soft skills, like empathy and customer service, and compliance.

The expansion comes on the heels of a pilot test Walmart launched this summer. The VR technology was used in 10 stores to train employees on the company’s new Pickup Towers. The company plans to use VR for training for other new technology rolling out to stores, the discounter reported.

“When you watch a module through the headset, your brain feels like you actually experienced a situation,” he said. “We’ve also seen that VR training boosts confidence and retention while improving test scores 10% to 15%, even those associates who simply watched others experience the training saw the same retention boosts.”

This is not Walmart’s first foray into VR technology. The company first introduced virtual learning in 30 Walmart Academy training centers in May 2017. The program’s success prompted the company to expand the technology to 200 academies by the end of 2017.

Walmart is so bullish on the technology that the company’s innovation lab, Store No. 8, acquired Spatialand, a small VR platform and content studio, in February. The studio is tasked with developing and exploring new products and uses of VR through immersive retail environments. The plan is to incorporate solutions into all facets of Walmart, online and offline.
Advertisement