Grocery chains will soon have a new way to get fresh produce into the hands of its time-starved shoppers.

Startup Robomart introduced a self-driving, nearly fully autonomous grocery store on wheels. The rolling robot is designed to bring fruits, vegetables, and other perishable items from the supermarket aisle to customers' doors, according to Business Insider.

The concept relies on a Sprinter van-sized delivery vehicle that is refrigerated, and features multiple shelves that will be used to display various types of produce, Business Insider revealed. (It can also be designed with a heating system.)

The rolling robot is outfitted with LiDAR — a detection system that uses radar, and light from a laser, cameras, a motion control system, and route planning and obstacle avoidance software. The vehicle can cover an estimated 80-mile range at 25 miles per hour. They are also equipped with the a wireless charging system, according to Engadget.

Here’s how it works: Shoppers use an app to “order” the vehicle — a concept similar to a ride sharing service. Once it arrives at their home, the shopper unlocks and opens the vehicle’s door, then makes their selection. A proprietary "grab and go" checkout system tracks which products are removed from the vehicle, then automatically bills the shopper's account and generates an online receipt, Engadget explained.

The concept, which debuted at the Consumer Electronics Show in Las Vegas this week, is expected to begin cruising neighborhoods in the Bay Area during a pilot program this summer, the report added.

Robomart founder Ali Ahmed, expects the concept to appeal to a collective of local stores that could use the vehicle to compete with big-box retailers. It also could appeal to wholesalers eager to directly connect with consumers, according to TechCrunch.

For now however, the vehicles could give on-demand delivery services, like those from Amazon, Instacart, and Postmates, a run for their money. Supermarket chains could license the platform and robots for a two-year lease — a much cheaper options than opening a new store, Business Insider added. Delivery fees also go into the retailer’s pocket, instead of sharing the revenue with an on-demand delivery partner. 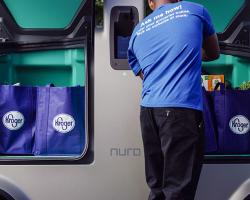 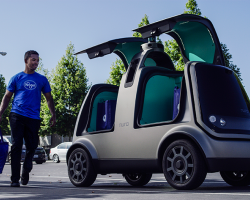 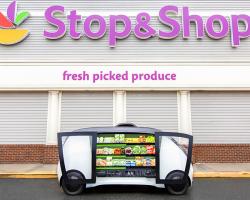