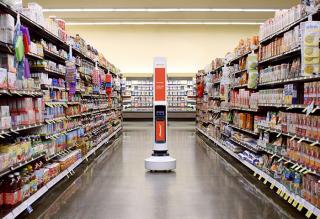 The family-owned supermarket retailer announced that it is rolling out Simbe Robotics’ autonomous shelf-scanning robots (called Tally) in at least 15 select Schnucks’ stores. Schnucks and Simbe kicked off a pilot at three Schnucks locations in July 2017, which has allowed the chain to capture deeper, real-time insights into on-shelf operations. As a result of the pilot’s success, Schnucks is expanding its use of the robot to the additional locations.

In its current deployment, Tally robots in Schnucks stores traverse the floors three times per day, scanning approximately 35,000 products per sweep. By increasing to at least 15 stores, in an average day the Tally robots will scan over 1.5 million products, giving Schnucks more accurate, frequent, and comprehensive insights into product flow and in-store operations, the company said.

The robot is fully autonomous, meaning it safely navigates around aisles and shoppers, and returns to its charging dock all on its own, without any human intervention.

“Tally has been instrumental in boosting the way our shelves are managed and how our stores function,” said Dave Steck, Schnucks VP of IT – Infrastructure and Application Development. “As a result of working with Simbe, we’ve experienced a phenomenon we call ‘The Tally Effect,’ an immediate improvement in in-store operations and increased teammates productivity.”

“We have confidence that with Simbe, our stores will run more smoothly and customers will continue to have exceptional, and modern, shopping experiences,” he said.