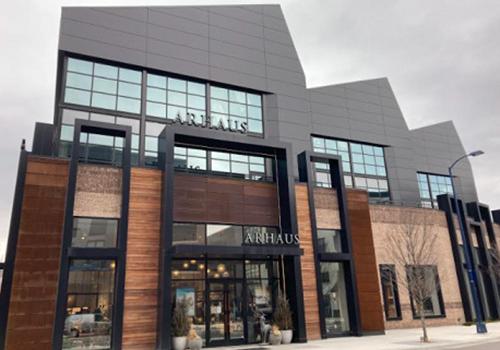 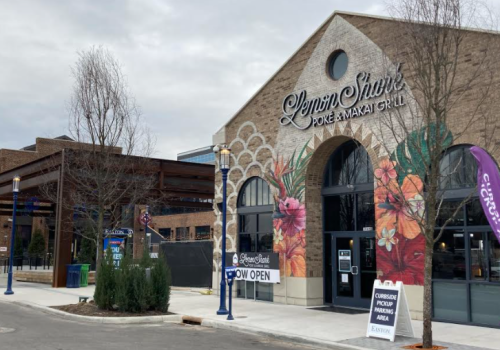 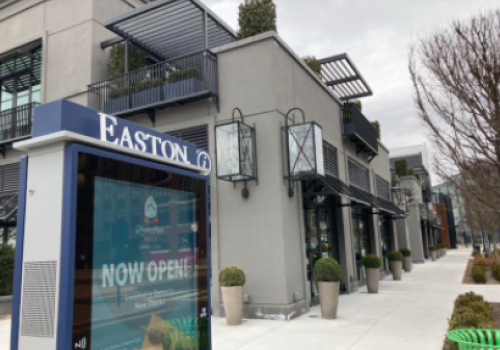 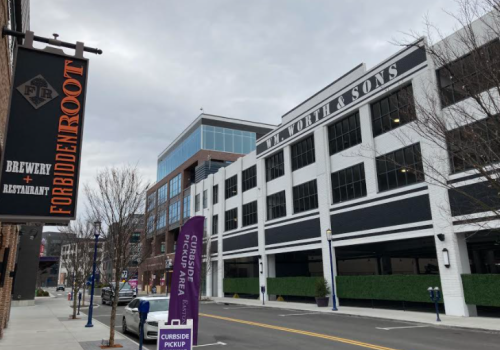 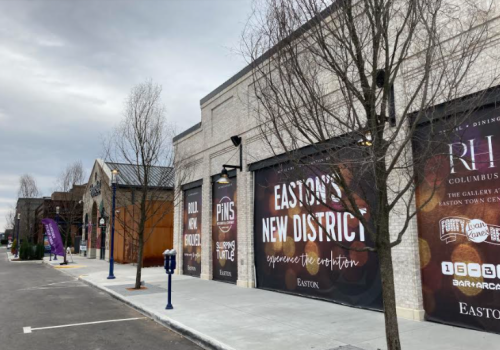 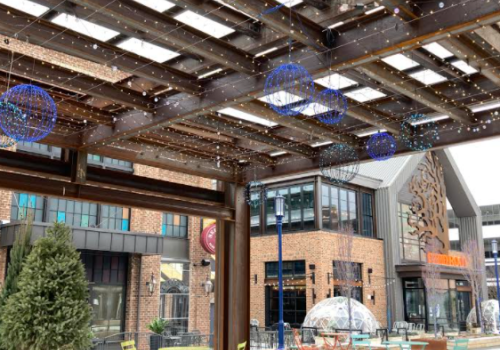 A new sign at Easton Town Center, the remarkable and highly influential mixed-use project erected by Les Wexner, Yaromir Steiner, and The Georgetown Company on a vacant tract in Columbus, states that its development 20 years ago was a brash move. “20 years later, we are boldly continuing our evolution,” the sign says.

Easton’s continuation, the 16-acre, $500 million New District is now opening up and offering another inspired example of what gathering-dining-shopping-playing spaces can be in post-pandemic America.

What separates the District from so many other mixed-use projects cropping up nationwide is its non-uniformity of design. The industrial brick structures conjuring up the old plants and warehouses converted to new uses in towns like Boston or Milwaukee indeed appear to have been converted. The sign on the M.W. Worth & Sons garage intimates that it didn’t used to be a garage (and gives old-timers like this reporter a reminiscence of the F.W. Woolworth store banners of our youths).

Across the street is the Forbidden Root brew pub, whose exterior is arty-modern, but whose interior presents a genuine imitation of a factory floor reborn as a cavernous gin mill. Exit that structure, turn left and see a brick-and-glass, Class-A office structure housing a Pins bowling alley. Across the street is RH Gallery. The 60,000-sq.-ft. building is six times the size of the old Restoration Hardware store at Easton and looks to have been plucked from Rodeo Drive.

Exit RH, turn left, follow the avenue’s delicate curve and you land in front of an Arhaus store whose bold Scandinavian presence forces you to cross the street to savor a complete view.

Though it’s clean and bright and tidy like the rest of the development, Easton’s New District appears as if its buildings came to be situated next to one another after decades of lifestyle, business, and fashion disruptions.

“We curved the streets and made things that didn’t line up perfectly to make it more genuine,” said Steiner, who gave us a tour of the neighborhood in his car. “It’s not all straight lines and right angles.”

Because of the pandemic, not all of the New District has come together on schedule. Residential units are on pause, and Steiner + Associates had to engage its own construction firm to complete another structure the original builder backed away from. But even in its current state, it looks like it could be picked up and planted in some up-and-coming, undeveloped neighborhood in Queens or Kansas City or Sacramento.

“At some point, every city will deserve a specialty retail concentration like this,” Steiner said. “It will require one.”