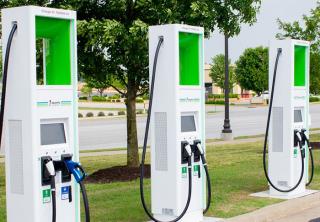 Electric vehicle (EV) owners have a friend in Walmart.

Most of the new stations are strategically located at Walmart stores off major highways, with dozens of more chargers planned for major metro areas. While many commercial EV charging stations in the U.S. are concentrated on the east and west coasts or in major urban areas, the Electrify America-Walmart collaboration is focusing on providing EV users with increased access to services near highways, rural communities, and driving routes in other sections of the country.

EV charging station placement along many of these routes allow for EV drivers the option to solely recharge at Walmart stores during their travels. Examples of routes include Houston to Chicago via I-45, I-35 and I-44, San Antonio to St Louis via I-35 and I-44, and Washington, D.C., to Savannah, GA via I-95.

In the 11 months since the two companies opened their first station at a Walmart store in Hope, Ark., Electrify America and Walmart have opened on average one new EV charging station every three days. Additional Electrify America charging stations are expected to be installed at Walmart stores located in urban areas such as the District of Columbia, and 46 states including California.

Electrify America chargers at Walmart stores feature 150 kilowatt (kW) and 350kW DC chargers which can charge a vehicle at speeds of up to 20 miles of range per minute.

“Along with providing our customers with an enhanced shopping experience through added convenience, this initiative also allows us to contribute to the expansion and accessibility of our nation’s EV charging station infrastructure,” said Mark Venderhelm, VP of energy for Walmart. “Many of our Walmart associates and customers are EV drivers so providing access to these stations is the right thing to do for our customers, our business and the environment.”

Electrify America is a wholly-owned Volkswagen subsidiary which is investing $2 billion over the next 10 years in EV infrastructure and education.
Advertisement