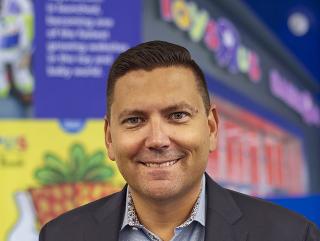 Plans to revive the Toys “R” Us banner in the U.S. are gaining momentum with the appointment of a veteran from the bankrupt chain to lead the new initiative.

Tru Kids Brands, which bought certain intellectual property of Toys “R” Us after the chain’s bankruptcy filing last year, and tech-driven experiential retailer b8ta have named Jamie Uitdenhowen as president of their joint venture — called Toy Retail Showrooms — to operate and manage Toys “R” Us stores in the U.S. He joins the company from Party City, which he joined in 2017 as chief merchandising officer. Prior to that, Uitdenhowen served as VP, general manager for Toys "R" Us, overseeing all merchandising decisions. He spent more than 18 years with the retailer.

As previously reported, Tru Kids and joint venture partner b8ta will open two Toys “R” Us stores later fall, at Simon’s The Galleria in Houston, and at Westfield Garden State Plaza in Paramus, New Jersey, with additional locations expected to open in 2020.

With a 6,500-sq.-ft. footprint, the stores will utilize B8ta’s experiential retail model to create an engaging and interactive in-store experience. They will operate the same as B8ta’s branded stores — brands will pay for shelf space, with all sales revenue going back to the brand (manufacturer).

In his new position, Uitdenhowen will oversee the day-to-day business operations, new experiential store development and vendor partnerships leading up to the brand's U.S. relaunch this fall and beyond.

"He [Uitdenhowen] has a strong and seasoned sense for what the next generation of kids and parents want, and we look forward to working with him to reimagine the toy retail experience together with our brand partners," said Phillip Raub, co-founder and president of b8ta and interim co-CEO of the new Toys "R" Us joint venture.