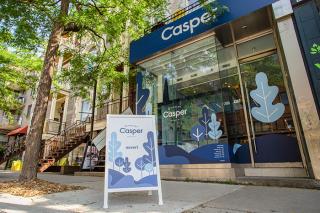 The fast-growing online company that disrupted the mattress industry has its sights set on brick-and-mortar expansion up north.

Casper, which upended the mattress industry with its bed-in-a-box product, has opened a temporary location in Montréal. It will be followed by a permanent store later this year.

The Montreal outpost comes on the heels of the company’s first Canadian site — and second permanent store to date — which opened in May, at Toronto’s CF Sherway Gardens. Its opening marks the launch of a multi-province retail fleet throughout Canada. Casper will also open a Canadian headquarters, in Toronto.

"We've seen tremendous success in Canada with three years of triple digit growth," said Philip Krim, co-founder and CEO, Casper. "Investing further in the market and expanding our local presence will enable us to bring better sleep to even more Canadians across the country."

Called Le Chalet Casper, the Montreal store offers an inviting environment inspired by the tranquility of a traditional Québécois summer home. Visitors can test out Casper sleep products in one of three miniature sleeping areas, with the spaces themed around the Canadian summer activities of hiking, sailing and fishing. Product can be purchased for carry out or for home delivery.

"At Casper, we believe that the experience of buying a mattress should be just as comfortable as sleeping on one," said Nicole Tapscott, senior director and general manager of Casper Canada. “Le Chalet Casper is designed as an oasis for people to relax as they would in a summer chalet to escape the city heat and bustle. We encourage visitors to touch, feel and experience our sleep products in an environment that will leave them with the feeling of a life well slept."

On the home front, Casper opened some 15 long-term pop-ups across the United States last year. In February, the brand opened its first-ever permanent location, in downtown Manhattan.

Founded in 2014, Casper’s total global revenue since inception has grown to more than $600 million.