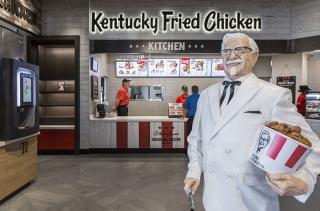 KFC has unveiled a marquee location in Overland Park, Kansas, as part of its ongoing store remodel and building program.

The KFC/Taco Bell co-branded restaurant is actually two complete restaurants in one, with separate drive-thrus, back-of-house operations and front counters. The nearly $3 million renovation features a completely customized design aesthetic and exclusive food offerings that include baked items. It is also the first and only location to feature KFC’s virtual reality training game.

The location is owned by KFC U.S.’s largest franchisee, KBP Foods, which also completed a $2.2 million renovation of KFC’s iconic “Big Chicken” restaurant, in Marietta, Ga., in May. KBP plans to renovate 250 of its 562 KFC and Taco Bell sites by 2020.

KFC and KBP Foods partnered with FRCH Design Worldwide on the 6,5000-sq.-ft. restaurant. It features KFC’s signature “American Showman” design aesthetic, with elements that pay tribute to KFC Founder Colonel Harland Sanders and the brand’s heritage. Nearly every element of the design was customized specifically for the Overland space.

The restaurant’s unique elements include a statue of Colonel Sanders for selfies and fan photos, lounge spaces in the reconfigured dining room, and a retail store selling KFC- and Taco Bell-branded merchandise.

In addition, the redesigned location is the only KFC in the world with a gaming console where customers can experience KFC’s virtual reality training game, The Hard Way, which debuted in August. It is designed as an “escape room” where Colonel Sanders gives trainees hints and clues along the way to ensure to help ensure they are making the company’s signature fried chicken the way that he invented more than 70 years ago.

Exterior upgrades include an all new facade with brick and distressed wood accents, new landscaping and painted murals. The exterior is also accented with color-changing LED lighting.

“Our partners at KBP Foods continue to make tremendous investments in their restaurants across the U.S., demonstrating deep passion for the KFC brand and a solid belief in the positive impact of capital reinvestment in their assets,” said Brian Cahoe, chief development officer for KFC U.S. “From extensive remodels like the iconic Big Chicken in Marietta, Georgia and the Overland Park restaurant to building new restaurants and extensive remodeling across the country, their partnership is helping us elevate the look and feel of our assets and drive the brand forward for the benefit of our consumers.”

The Overland Park renovation is in line with KFC’s plan to remodel approximately 70% of its U.S. restaurants. Since 2015, more than 800 KFC restaurants in the U.S. (more than 20%) have been updated to the American Showman design.

KFC Corporation is a subsidiary of Yum! Brands.