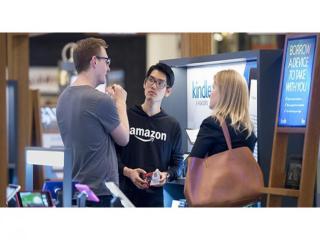 Amazon won’t be “popping up” anymore.

The online giant will shutter all of its 87 pop-up locations in the U.S. by the end of April, The Wall Street Journal reported. The pop-ups, which are inside locations that range from malls to Kohl’s to select Whole Foods Market stores, allow shoppers to try out Amazon products and services.

“After much review, we came to the decision to discontinue our pop-up kiosk program,” Amazon told the Journal.

According to the report, Amazon will focus on opening new Amazon 4-star stores, which sell items that are rated 4 stars or above, are top sellers, or are new and trending on Amazon’s website, and also new bookstore locations. (On Wednesday, March 6,the company opened its 19th Amazon Books location, and first in Colorado, at the Cherry Creek mall in Denver.)  The company is also reportedly planning to open dozens of grocery stores around the U.S. The stores would be distinct from Whole Foods Market, with lower price points and broader offerings.
Advertisement