All Birds going offline with stores

All Birds going offline with stores

The maker of what it calls “the world’s most comfortable shoes” is expanding its brick-and-mortar presence.

Allbirds, the eco-friendly online brand with a fast-growing following, has opened a nearly 5,000-sq.-ft. store in Manhattan’s SoHo neighborhood. The store will replace a much smaller, temporary outpost that All Birds opened in the area last September.

The SoHo opening coincides with the unveiling of the brand’s updated store near its headquarters in San Francisco. And more are in the works. Allbirds, which launched online in 2014, plans to open eight more stores in the U.S. during the next year, including locations in Chicago, Boston, Los Angeles and Washington, D.C., reported CNBC.

Allbird’s signature footwear is made from renewable Merino wool. (The company says that the wool minimizes odor, regulates temperature, and wicks moisture.) The brand has expanded its product lineup from two items — a “lounger” and a casual sneaker — with a sneaker called Tree Runners, made of naturally derived and renewable eucalyptus tree fiber, and SweetFoam flip-flops, which are made out of a sugar-based outsole material.

"Given how tactile our product and brand story is, it's important that we continue to create these opportunities to interact with customers," Allbirds co-founder Joey Zwillinger told CNBC.

The new SoHo store was designed in collaboration with Partners & Spade, New York. Similar to the temporary SoHo space it has a minimalist design. Signage and graphics go into detail about the sustainable materials used to make AllBirds’ products. 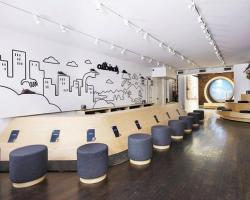 STORE SPACES
Allbirds will use new funding to fuel expansion 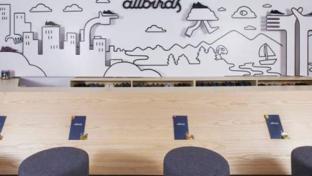 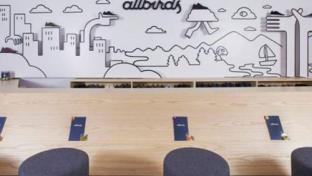 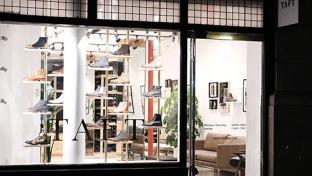