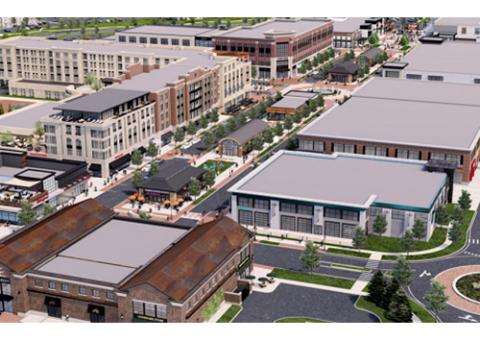 One of the top stops for people leaving Boston: The 3 million-sq.-ft. Tuscan Village on the former site of Rockingham Park in New Hampshire.

In the third quarter of 2019, Boston’s apartment vacancy rate was zero. One year later, it was nearly 5%. September unemployment rolls in New England’s premier market listed the names of 306,000 more workers than it did in February and the town’s 9.8% unemployment rate was three times higher than it was before the pandemic.

“Boston’s like a ghost town, and it was always hustle-bustle,” said Mike Powers. “It’ll come back, but it’s a wakeup call to the real estate market that things had gotten out of hand.”

As the senior VP of Tuscan Village, a 3 million-sq.-ft. mixed-use development on the former site of the Rockingham Park race track, Powers has seen a fair amount of Boston’s missing population visit the site in Salem, N.H. The development has more than doubled the number of apartments it had originally planned, and top retailers are rapidly opening.

Home Sense, Sierra Trading Post, and the Market Basket supermarket are among the brands already doing business at Tuscan Village. Opening soon will be Old Navy, Ulta, Williams-Sonoma, Pottery Barn, and L.L Bean. But most of the visitors from Boston, just 30 miles away, are inspecting larger apartments than they had in Boston in a state that charges no income tax. Because large parts of Tuscan Village are still under construction, the development was able to make some changes to its original plan after the pandemic hit.

“We originally were thinking of 500 to 600 residential units, but people were coming at us aggressively for more, so the new plan is for 1,200,” Powers said. “We also made changes in the floor plans. For lots of people, their living rooms will continue to be their offices after the pandemic, so they’ll need a bigger place.”

Upon completion, Tuscan Village will have 700,000 sq. ft. of retail (with 200,000 of it opening later this year), more than a million sq. ft. of office space, 15-plus restaurants, a six-acre lake, and a 70,000-sq.-ft. Mass General Hospital surgical facility—the world-class hospital’s first location in New Hampshire.

“The big picture that’s emerged during the pandemic is that the mixed-use strategy is working,” Powers said. “Where they work or live, people want good restaurants, accessible retail, a hospital, a dentist. They want to be less reliant on their cars.”