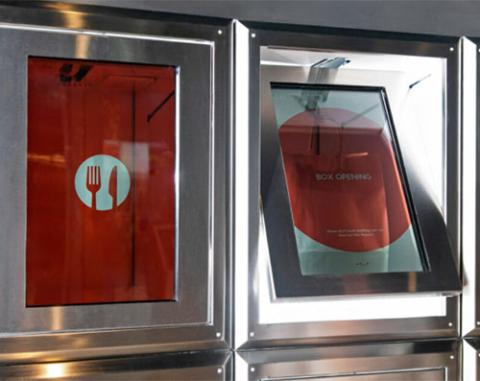 The quick-service automat restaurant concept that died in the Nineties has been revived by digital technology.

The automat’s days became numbered when the likes of McDonald’s and KFC hit the scene, and the last of Horn & Hardart’s 40 New York City locations closed in 1991. In 2021, however, the automat re-appeared at the Newport Centre mall in Jersey City. Called the Automat Kitchen, this version came to market aided by digital technology.

The concept got its start in 2005 when a Florida-based tax attorney named Joseph Scutellaro, a Hoboken native whose grandmother took him to Horn & Hardart as a kid, hooked up with some tech executives at Disney.  They created a system that would allow hungry folks to access the Automat Kitchen’s menu on touchscreens or their phones. The customer gets a text when the order is ready that says, “Head to box number 16 and enter passcode 132 or reply ‘open’ to this message to retrieve it.”

“The world is a perfect place right now for this concept,” said David Hinkle, a partner at The Outlet Resource Group who is helping Automat with its expansion. “One thing we’re looking closely at are environments such as hospitals and airports. When your plane lands, you can order your lunch, pick it up when get off, and go directly to your connecting flight.”

“We didn’t launch the business in 2005 because the touchscreen store menus cost $5,000 a pop back then. Now they’re $400, and that allows us to run the front-of-house without employees,” Scutellaro said. “We also streamlined the back-of-the-house operations in a way that food can be turned around in five to 10 minutes.”

In deference to the foodie culture, Scutellaro and his partners hired chef Phillip Speer to design the menu. In 2019, his Comedor restaurant in Austin was named one of the best new restaurants in America by The Robb Report and “Austin Restaurant of the Year” by Texas Monthly. Items include old favorites like chicken pot pie, but also an Atlantic salmon entree and a frito pie burrito that never made it behind the doors at Horn & Hardart.

Scutellaro recently signed a letter of intent for a second location with an entertainment property in Florida and is looking to franchise Automat Kitchen.