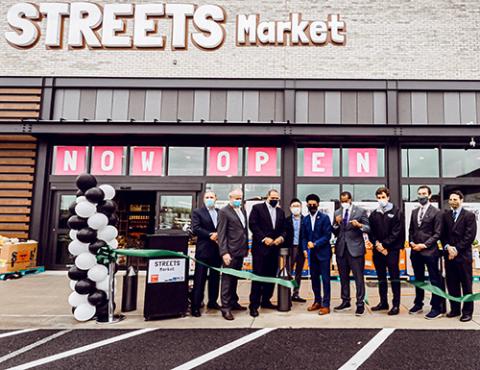 David Bramble (3rd from left) opens a supermarket and an outdoor center in a Baltimore food desert.

Two Baltimore guys named David Bramble and Peter Pinkard recently accomplished something few in town thought could be done. This month they opened Yard 56 and brought a supermarket, a gym, and several restaurants to a location that was a contaminated brownfield site since the Porcelain Enamel Manufacturing Company closed its factory there in 2006.

Bramble is the son of Joy Bramble, publisher of The Baltimore Times, and the Rev. Peter Bramble, rector of St. Katherine of Alexandria Episcopal Church, and he still lives in the house he grew up in in the Madison Park neighborhood. He worked as a real estate attorney in town before he and Pinkard formed MCB Real Estate and became developers. They now own and operate 10 million sq. ft. of properties up and down the Interstate 95 corridor, though the 20 acres of it on Eastern Avenue in Baltimore is their crowning achievement.

Bramble and Pinkard won New Market Tax Credits that attract private capital to low-income communities and secured property tax credits as part of an Enterprise Zone. They secured the trust of municipal leaders and cleaned up the site. Most importantly, MCB gained a major equity partner, Prudential Financial, because the state had declared the area an Opportunity Zone. That’s a relatively new federal policy providing significant tax advantages to investors willing to back projects in underserved areas.

“This property was a great location, but it was encumbered by the old factory, so it took us some time to convince the community that we were going to build something that would be a credit to the neighborhood,” said Bramble.

“Next, we had to convince the retailers that both the city and the neighborhood was right for them,” Bramble continued. “That turned out to be easier than we anticipated. Most of them were eager to set up shop there.”

MCB will be adding a planned 224 residential units in phase two of Yard 56. Next on the company’s Baltimore agenda is Madison Park North, a development comprised of town houses, apartments, green space, and shops in the neighborhood where Bramble grew up and still lives.