Will Salem, N.H., be the site of Boston’s best new town center?

Will Salem, N.H., be the site of Boston’s best new town center?

What it does not have that residents and tenants of new developments in booming Boston do have is state income taxes.

That could be the thing that makes Tuscan Village in Salem, N.H., a popular lifestyle alternative to the thousands of people streaming into Boston for lucrative jobs in the technology and medical industries. Tuscan Village is just 30 miles from the Boston Common.

Boston’s population, which remains well under a million, increased by more than 120,000 people between 2013 and 2017. The retail real estate vacancy rate is under 3% and average asking rent downtown is $36 per sq. ft., according to Marcus & Millichap.

“There’s an explosion of population in the Boston market and up the seacoast, a lot of inward migration driven by a robust employment economy,” said Mike Powers, senior VP of leasing and development for Tuscan Village. The project’s developer is Joe Faro, a local entrepreneur who sold his Joseph’s Gourmet Pasta and Sauces business to Nestle in 2006.

While Tuscan Village may be brand new to Bostonians, millions of them walked its grounds when the site was Rockingham Park, a noted horse track where Seabiscuit raced in the 1930s. The site is also adjacent to the Mall at Rockingham Park, a Simon property with scads of Massachusetts traffic due to the fact that New Hampshire also lacks a sales tax.

Powers is an old hand at town centers. He worked on both Easton Town Center and Crocker Park in Ohio and is applying some of the same real estate and tenant curation principles employed at those groundbreaking centers.

“When we were determining what to put in Tuscan Village, we said, ‘What if you were going to have a wedding here and spend the weekend here?’ We said we’d want a beautiful setting with water, fire pits, and landscaping. We’d want a choice of at least two hotels, lots of great food and beverage alternatives, and an entertainment district,” Powers said. “We thought it should function like a downtown. Salem doesn’t have a downtown.”

The 50-acre North Village section of the development with 200 residential units is the first phase to open. There are 200,000 sq. ft. of retail there, with Market Basket grocery the only tenant to be named as yet. 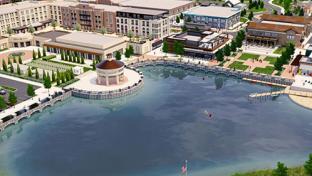 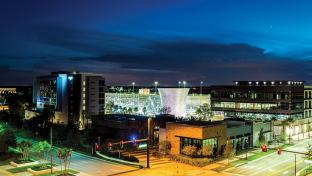