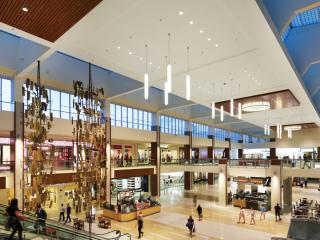 A study of 90 regional and super regional shopping malls conducted last year by JLL found that 19% of them had renamed themselves and dropped what the retail industry has come to call the “M-word.” There is a general perception among the populace and in the media that the enclosed mall is a relic of the late 20th century, as outdated and irrelevant as The Sharper Image and Hoffritz cutlery shops are that one spies in the background of the 1991 film “Scenes From a Mall.” Even CEO Sandeep Mathrani of GGP, the second largest retail real estate owner in the United States, is on record as saying the company tries to avoid using the word “mall” nowadays.

The facts behind the overbuilding of indoor shopping meccas that took place in the ’80s and ’90s (resulting in twice as much retail space per person in the United States than in the United Kingdom or Japan) are well known by members of the retail real estate industry. That’s why mall owners the likes of PREIT, CBL, and Starwood are recapturing empty department stores and filling them with the dining, fitness, and entertainment tenants that their customer bases are crying out for.

A study done last year by the International Council of Shopping Centers found that the typical dwell time for fine dining establishments in shopping centers was two to three hours, and that people who engaged in social drinking in bars stayed an average of 60 to 90 minutes. For shopping center owners and operators charged with building traffic for retail tenants, numbers like these don’t go unnoticed. In fact, plenty of malls — among them Easton Town Center in Columbus, Ohio — realized the lure of upscale hospitality years ago.

But all the traffic statistics, digital transformation, and demographic modulation don’t negate the fact that people have been coming together in central locations to eat, be entertained, and shop since the beginnings of recorded history — even before the first enclosed shopping bazaar was built in the 15th century. In fact, Simon Malls’ property brochure pays tribute to the influence of the ancient marketplace, calling shopping a “contemporary interpretation of vibrant Middle Eastern bazaars, colorful North African souks, picturesque Asian markets, and busy European trading squares, where atmosphere and socialization were as important as commerce itself.”

While there’s no question that scores of malls will fall in the coming years and scores of new mixed-use developments will rise, the formula of dining, entertainment, and gathering places prescribed for retail centers of the future is hardly new. Indeed, these consumer traffic builders hark back to the earliest ages of consumer exchange.

The “Oxford History of the Classical World” notes that society in ancient Greece, which consisted of vast tracts of sparsely populated land, grew up around the polis or city-state. The central social gathering spot of the polis was, in turn, the agora.

“There had to be one focal point — religious, political, administrative — around which usually grew up a city, usually fortified, always offering a marketplace, or agora, and a place of assembly, often the agora itself,” according to “Oxford.”

The agora was not merely a place for the trading of goods, but of political theories and ideas put forth by philosophers such as Socrates. Like the new gathering places being created by such developers as Steiner, Trademark, and North American Properties, to name a few, social interaction — not closeout sales — were the traffic draws in ancient Greek marketplaces. Still, the Greek word “agora” does translate to “buy.”

“Retail trade is fundamental to every culture,” said Dave Cheatham, president of X Team Retail Advisors, a consortium of 37 real estate companies that develop, lease, and manage retail properties across the United States and Canada. “For centuries people have gathered at the marketplace. From farmers’ markets, to entertainment centers, food halls, open air public markets, and traditional storefronts, brick-and-mortar retail has always been a part of the fabric of a community.”

Some historians point to Trajan’s Market in Rome as the first shopping mall and one of the emperor Trajan’s great contributions to Roman society. It’s even possible that it was the first mixed-use center.

With dense residential development and a hillside cutting off expansion possibilities for the Forum, architect Apollodorus cut into the hill and went vertical with the terraced, six story-high Trajan’s Forum. Apartments filled the upper floors and shops called “tabernae” crowded the ground floor. In a Roman society in which Caesars built their reputations by waging war, Trajan left a legacy that continues to manifest itself in retail real estate today.

“What if the Romans would have never built the Forum?” asked Ralph Conti, developer of Celebration Pointe in Gainesville, Fla., a 1 million-plus-sq.-ft. development with garden apartments, a hotel, and such tenants as Bass Pro Shops and the first Rascal Flatts Bar & Grill. “How might the absence of what was arguably the most celebrated public center in the history of the world have impacted one of the most storied societies in history?”

Another perhaps more interesting question for current detractors of the enclosed mall is, “How is it that the world’s oldest covered marketplace is still open for business?” More than half a millennium since it opened in 1464, Istanbul’s Grand Bazaar remains one of the most successful shopping destinations in the world, drawing some 92 million visitors a year. It recently renovated its ancient tiled roof to safely welcome hordes of shoppers from around the world. Built as a trade center for merchants from all corners of the Ottoman Empire, the bazaar is essentially a roofed neighborhood with 22 gates, 64 streets, and 3,600 shops.

The oldest mall in America still thrives, as well, under the direction of Simon Property Group. Southdale Center in Edina, Minn., like the 260-year-old Great Gostiny Dvor center in St. Petersburg, Russia, had a logical reason to put up a ceiling: It’s too cold to walk from store to store in both places.

Victor Gruen, the designer of Southdale, did not have a network of sterile, cookie-cutter mega-centers in mind when he built the center. It was quite the opposite, actually. Gruen sought to recreate the inviting streets of his native Vienna and give people a community gathering place at which to shop, but also to stroll, linger at cafés, and socialize. This is what sociologists call a “third place,” inviting public gathering places outside of one’s  own home or workplace that, in Gruen’s words, “provide the needed place and opportunity for participation in modern community life that the ancient Greek agora, the medieval marketplace and our own town squares provided in the past.”

New age food and entertainment retailers are doing a good job of putting a panoply of “third place” options at the disposal of shopping center and mall developers, who fight over the hottest concepts. One of them is Punch Bowl Social, which offers arcade games, bowling, Ping-Pong, and karaoke to customers, along with food and drink. Robert Thompson, founder and CEO of the