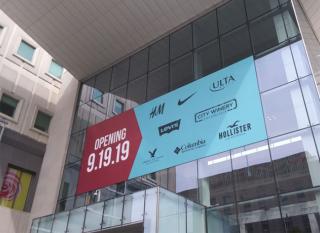 After city founder William Penn decreed that markets should be held regularly on High Street in Philadelphia, the thoroughfare came to be known as Market Street, a name that would thence be applied to retail streets across the nation. In the 19th Century, the street was lined with department stores. In the late 20th Century, it was the home of The Gallery at Market East, a mall that closed in 2015.

Since then, Market Street has left the heart of a great city with little in the way of shopping options.

But on Sept. 19, retail returns to Market between 8th and 11th Streets in a big way when PREIT and Macerich cut the ribbon on Fashion District, a 900,000-sq.-ft. center with street entrances to more than 100 retail, dining, and entertainment tenants. The complex -- linked internally to the SEPTA train station and the Pennsylvania Convention Center -- will immediately offer up Center City workers and dwellers with options they’ve long lacked or never had.

These include a flagship H&M store, an 8-screen AMC Cinema, City Winery, Century 21, Nike, Ulta Beauty, Asics, Guess Factory, Hollister, Eddie Bauer, Zales, and an Aramark-run food court in an area adjoining the SEPTA entrance. The bright and airy Fashion District is decorated with art from local artists and will play host to a calendar of events throughout the year.

Philadelphia mayor Jim Kenney will be joined by developer CEOs Joseph Coradino from PREIT and Tom O’Hern from Macerich at Thursday’s grand opening. Shoppers entering Fashion District for the first time will be greeted by a marching band and confetti cannons.

"This experience-forward project is a model for what the best retail properties all over the country are becoming: more things for more people, and all in an unbeatable, heart-of-everything location," said Macerich CEO Tom O'Hern.

Noting that it had been 16 years since PREIT acquired the first of three separately owned properties that had constituted The Gallery, Coradino guaranteed the return of retail to the Market East neighborhood of Center City for good.

“The District will truly redefine the national consumer experience and the future of retail,” Coradino predicted.
Advertisement