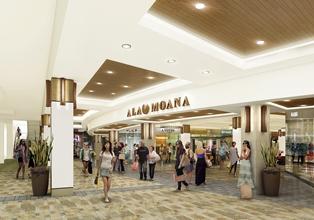 Honolulu — With 42 million visitors per year, the two million-sq.-ft. Ala Moana Center in Honolulu boasts sales per square foot of $1,300. At the beginning of the year, owner General Growth Properties began a massive $572 million redevelopment of Ala Moana — the world’s largest open-air shopping mall. The goal is to add 650,000 sq. ft. of new retail space.

To date, phase one of the center court redevelopment has been completed. The work has updated the common area finishes and restrooms and added new stores, including ‘Auana Quilts, which is now open, and Minamoto Kitchoan, a Japanese confectionery shop slated to open in September. Several existing retailers have relocated within the renovated Center Court area: Island Sole, Lupicia, Swatch, True Friends, Valerie Joseph and Watumull’s.

Phase two is underway and will finish up in November. It will add a Freaky Tiki Tropical Optical sunglasses store and a Nature Republic beauty shop and relocate four stores. It will also construct a new center stage and a new customer service center.

There’s a lot more to come. GGP has bought out the lease on the 340,000-sq.-ft. Sears for $250 million. The store will remain open as Sears throughout this year.

Back in May, GGP announced that a 167,000-sq.-ft., three-level Bloomingdale’s would serve as the centerpiece of the retail expansion in and around the Sears store, which will be demolished.

The retail expansion will include large format retailers, dining, entertainment and 200,000 sq. ft. of inline retailers.