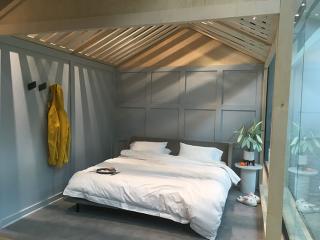 Digitally native brands will fuel the next wave of store expansion.

That’s according to a new research report from JLL, which found that e-commerce retailers plan to open 850 stores in the next five years. The report cites such examples as mattress-in-a-box brand Casper, which will open 200 stores within three years, and women’s lingerie brand Adore Me, which has announced up to 300 additional stores in five years. All Birds, the eco-friendly footwear brand, is also opening stores.

JLL, which analyzed the histories and expansion plans of 100 of the top digital retailers to evaluate their strategies, found that New York City remains the top city for pop-ups as well as first permanent locations, with marquee markets like Los Angeles and San Francisco also being popular choices. More than half (59.5%) of clicks-to-bricks retailers opened up pop-up locations in New York, with more than a third (41.3%) opening their first permanent location there.

Manhattan’s SoHo neighborhood was one of the prime retail locations for pop-up stores where e-retailers are testing new concepts — almost half of clicks-to-bricks retailers in New York chose SoHo for a first pop-up. These retailers typically choose storefronts off Broadway, where it’s easier to find smaller footprints but still benefit from ample foot traffic.

Other findings from JLL’s report, “How e-commerce brands get physical,” are listed below.

• The year 2017, saw the greatest number of clicks-to-bricks retailers. Everlane, Allbirds, Away and MM.LaFleur were among the brands that opened permanent physical locations last year.

• Half of all clicks-to-bricks retailers have high price points; 32.0% are mid-priced retailers.

• Only 15.1% of clicks-to-bricks physical stores don’t carry any inventory. Of those that operate as showrooms, 69.2% are apparel and accessory retailers. Houseware and furniture retailers make up the remaining 30.8%.

“It makes sense that e-commerce retailers that sell apparel and home goods are looking to move into physical stores, since their products are the type consumers like to inspect in person,” said James Cook, Americas director of research, retail, JLL.

“As these e-commerce brands mature we believe based on our research that those in the apparel and home good segments will continue making the transition to a clicks-to-bricks retail format.”
Advertisement