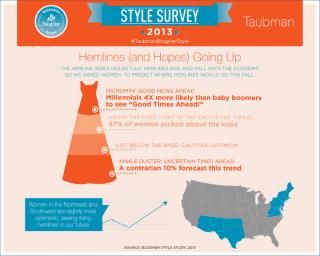 Some of the economists that have looked into the theory claim that it may have merit. Other economists suspect the concept is some sort of fashion promotion. The division of opinion, of course, supports another unrelated theory — that economists have predicted 10 of the last five recessions.

Ignoring economists, BlogHer and Taubman Centers recently asked women what hemline trends (and other style trends) they detected in the current fashion world. The results appear in the 2013 BlogHer-Taubman Style Study, which asked 1,609 female respondents, aged 18 and older about hemlines, the acceptability of wearable technology and where women are most likely to tend toward excess.


What’s up with hemlines?

With the theory of the hemline index in mind, researchers asked respondents to predict where hemlines would go this fall. Would they forecast ankle-dusting maxi skirts and throw the economy (and perhaps a number of men) into deep depression? Would they see hemlines just below the knee — suggesting cautious optimism for the economy? Would they call for hemlines to rise above the knee, foreseeing a “light at the end of the tunnel?” Or would a micro-mini-skirt prediction proclaim “good news ahead?”

And the results are:

Do women want to wear technology?

Millennials are more interested than other generations of women in every kind of wearable tech, from glasses to clothing.

In an indication that there may be a widening gateway to wearable tech — would that be good news? — 74% of women now rely solely on their smartphones to tell the time.

Gosh. How many shoes? The survey found that one in eight women has more than 50 pairs of shoes. That totals 100 individual shoes! Forty-three percent own between 20 and 49 pairs of shoes.

One-third of the respondents carry a purse weighting in at six pounds or more. Women in the Northeast are three times more likely to carry a 10+ pound purse than women in the Northwest.

Undercover and under the covers

The survey uncovered some trends that some of us may not want to know about. For instance, 38% of all women wear the number-one undergarment choice, bikini briefs. Millennials, however, have begun to wear a tad more thongs than bikini briefs.

Two-thirds of all women wear “comfy stuff” like flannel or sweats to bed, however, a robust 22%, all the way up in age from Millennials through Boomers, sleep “in the buff.” Bad news for retailers.

Of the 1,609 respondents 821 were members of the BlogHer Visionaries Panel, a diverse panel of more than 4,700 women age 18 and older recruited from the BlogHer community and geographically dispersed throughout the U.S. The remaining 787 respondents were members of the general U.S. population. The margin of error at 99% confidence is 2.34%. All portions of the study were conducted in August 2013.