New York City has everything, it’s said, but one thing it did not have is a retail outlet center. Now it does.

“The Outlets will serve as a premier shopping destination for both residents and visitors, with millions of people expected to shop there every year,” said Vicki Been, New York’s deputy mayor of housing and urban development. “The City worked hard to bring this project to fruition, and we look forward to it becoming a central attraction in the community for generations to come."

The opening of Empire Outlets marks the first big event in a campaign to set up the North Shore of Staten Island as a destination for both tourists and locals from New York City and New Jersey alike.

Designed by SHoP Architects, Empire Outlets will feature expansive open corridors to the water, contemporary materials reflective of the industrial waterfront, and a sustainable green roof visible from the harbor. Grand staircases, elevators, and streamlined escalators will guide shoppers as they move from the waterfront up to Richmond Terrace.

A 40,000-sq.-ft. food and beverage deck will open at the project this summer. Promised are dozens of restaurant concepts that include the MRKTPL food hall.

Original plans for the development had included a 630-ft. Ferris Wheel planned by developer Meir Laufer and patterned after the London Eye. It was to beckon tourists to the site in the St. George neighborhood of Staten Island with a multimedia light show. Construction had begun on the wheel when investors pulled out of the project last October.

"The opening of Empire Outlets is a historic day for Staten Island and for BFC Partners," said Joseph Ferrara, a principal of BFC Partners, which played a role in the redevelopment of Williamsburg, Brooklyn. "We set out to revolutionize the shopping experience in New York City and we are proud to have successfully created a unique and unforgettable shopping destination." 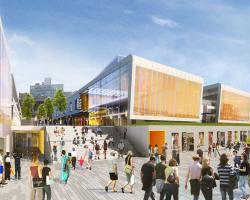 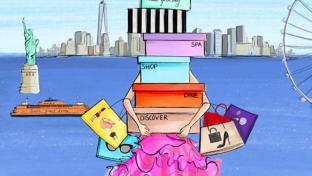 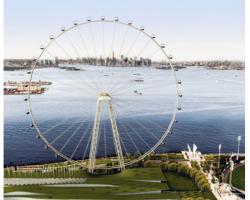 REAL ESTATE
Staten Island Ferris Wheel may be back on track 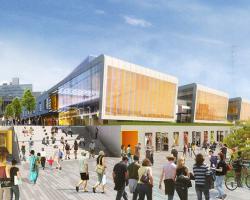