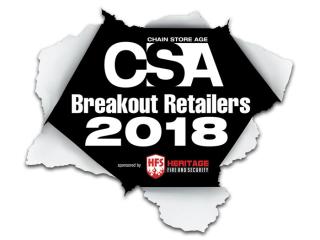 Chain Store Age is proud to announce the Breakout Retailers of 2018.

The annual awards, selected by the editorial board of Chain Store Age, honor emerging retail/restaurant concepts that are innovative and show strong potential for growth. The class of 2018 features five forward-thinking brands that are redefining and reinventing their industry segments, and includes two digitally native retailers that are successfully extending their brands offline.

“This year’s winners are charting new courses to succeed in today’s highly competitive and disrupted marketplace,” said Marianne Wilson, editor-in-chief, Chain Store Age. “They are shaking up the marketplace and connecting with customers in meaningful ways. And they have a very clear pathway for growth.”

The winners, listed below in alphabetical order, will be honored at Chain Store Age’s annual SPECS Conference (March 18-20, 2018, Gaylord Texan, Dallas), and will share their success stories in a special session during the conference. Heritage Fire and Security is the sponsor of this year’s Breakout Retailers Awards.

Someone forgot to tell Indochino that getting consumers to buy custom-made menswear would be a hard sell. A digitally-native brand, Indochino offers made-to-measure suits and shirts with thousands of customization options. The company opened its first permanent retail space (“showroom” in company- speak) in fall 2015 and has since expanded to 20 locations, with 12 in the U.S. and eight in Canada.

Indochino’s brick-and-mortar format brings its online personalization experience to life in a contemporary, stylish-looking space that reflects its overall brand aesthetic. The company plans to open 18 locations in 2018, with a goal of opening 100 during the next decade.

Not everyone goes to a restaurant just to eat and drink. Some people want to play games too — especially Millennials. That’s part of the appeal of Punch Bowl Social, an expanding player in the “eatertainment” category. Launched in 2012, Punch Bowl Social offers a multi-dimensional experience that combines diner-inspired, made-from-scratch food and craft beverages with an array of social games and activities (bowling, Ping-Pong, Skee-Ball, karaoke rooms, shuffleboard, and more).

The Punch Bowl environment is playful and visually dazzling, with Victorian, mid-century modern and industrial design details. With 11 locations to date, the company has six new locations in the works for this year, including its Northeast debut, in Brooklyn, New York.

Founded by Tom Kartsotis, former chairman and chief executive of Fossil, Shinola is best known for its expertly crafted and well-designed “Built in Detroit” watches, bicycles, and leather goods — an aesthetic that extends to its expanding lineup of lifestyle products, with the most recent addition being a line of audio headphones. The same aesthetic applies to its stores, which are designed as stylish lifestyle destinations, complete with cafes and even tattoo parlors in some instances that also reflect the vibe of their locale.

Shinola has grown from its Detroit hometown to 31 locations nationwide (and an e-commerce site), with some goods also sold at select U.S. retailers. It will open a branded-hotel in Detroit later this year, and has said it plans to keep growing until it hits a sweet spot of around 75 to 100 locations.

Sweetgreen offers a healthy and customizable take on fast-food eating — with the added bonus of seasonal dishes and sustainable sourcing. The restaurants are designed to emphasize the chain’s food transparency, its healthy, cook-from-scratch focus and local community orientation. Sweetgreen’s embrace of technology includes a no-cash policy, an online ordering platform and a strong mobile presence. It even has its own video channel on YouTube.

With some 80 locations and the trend to healthy eating only accelerating, especially among millennials, Sweetgreen sees plenty of room for national expansion. The company recently opened a 2,700-sq.-ft. indoor-outdoor space at Westfield Century City in Los Angeles.

A simple idea — men’s shirts designed to be worn untucked — proved just the taking off point for UNTUCKit, which has expanded its lineup to include boy’s and women’s offerings as well as additional men’s items. Mirroring its strategy online, the brand’s growth in physical retail — it opened its first store in 2015 — has benefitted from high-touch customer service. Associates help customers choose from the selection of “try-on” sample shirts on display. When the customer has decided on the style, size and fit, the associate retrieves the fresh item for purchase.

With approximately 25 locations and an e-commerce site, UNTUCKit is growing at a rapid clip. It plans to double its store count by the end of 2018.
Advertisement