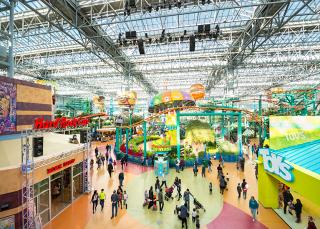 Last years’ Electric Daisy Carnival in Las Vegas, a music and dance fest with rides, drew 130,000 young people on its final day. This summer, Billy Joel will play his 43rd sellout concert at Madison Square Garden, where floor tickets sell in the $200 range. No matter their age or inclination, people still want to leave their laptops and homes behind and be with other people. They just need someone to give them a really good reason to do it.

Nine out of 10 retail purchases still take place in malls, and the retail venues that make good on that challenge will win the lion’s share of that bounty. In the interests of both innovation and inspiration, Chain Store Age thought it was time to single out the venues that put a capital “E” in “experiential” with 10 great examples. We’ve been counting down the top 10, and today we're unveiling No. 1!

When Chain Store Age embarked on a search for the Top 10 Retail Experiences in the nation, it was hard for us to look past a 5-million-sq.-ft. mall in Minnesota with a roller coaster and a comedy club, as well as a Hard Rock Café and a just-opened GameWorks, where customers can bowl, play laser tag and video games (and dine). And next month, golfers will be able to play putt-putt under blacklight at a new 1950s's rock-and-roll themed mini golf course.

It should come as little surprise, then, to see Mall of America occupying the No. 1 spot in our Top 10 countdown that culminates today.

“We’re really appreciative of this recognition,” said Jill Renslow, senior VP of marketing and business development for MOA. “The Ghermezian family had a vision that if they made experience number one, people would come from around the world to visit Mall of America. That original vision continues today.”

It’s been 25 years since the Ghermezians’ Triple Five development company threw down the gauntlet for experiential retail on the site of the demolished Metropolitan Stadium in Bloomington. But customer experience has continued to evolve at MOA with new attractions that include SeaLife Aquarium, Flyover America, and The Crayola Experience.

The latest innovation is a testament to MOA’s maturity as a retail experience provider. The property’s got the traffic — some 40 million visitors a year. Now Triple Five’s working on getting them to spend more time in shops with the Enhanced Service Portal, or ESP. Initial results on the store directory app finds it has a user dwell time of just 40 seconds versus three minutes for physical directories.

“We constantly review consumer lifestyles and how they change,” Renslow said. “Our communication command center — or ESP — is aimed at bringing a convenient, customized experience to our visitors. We want them to feel valued.”

It adds value to retail tenants, as well. If it takes shoppers less time to track down any MOA’s 500-plus stores, they have more time to spend money inside of them.

The high point, literally, of this open-air luxury marketplace is the Climate Ribbon, a sculpted, undulating canopy that catches breezes from nearby Biscayne Bay and circulates them to cool shoppers. The $30 million Ribbon--a joint project of a Paris design firm and Carnegie Mellon and Cardiff universities — collects five million gallons of rainwater a year to aid the cooling process, making it a paradigm for green construction that combines both beauty and functionality.

When Jennifer Peterson got the head-hunter’s call for the chief executive’s spot at Ohio’s premier mall, she thought it was a mistake. As VP marketing of PINK and GM of C.O. Bigelow, she knew plenty about building retail brands, but malls? It was no mistake.

The formula of Steiner + Associates, owner of the Columbus mega-mall, calls for the mall experience be profitable for tenants, so who better to apply it than an experienced retailer? Retailers know that if something works, keep doing it until it doesn’t. That’s why -- though the Council of Fashion Designers of America phased out its Fashion’s Night Out Event in 2014 -- the party still rages on at Easton.

“It’s been such a hit that we kept on going,” Peterson said. “On Fashion Night, we’ll have upwards of 50 retailers hosting people and pouring drinks in their spaces or out on the Strand in tents doing demos.”

The former tenant at major malls nationwide singled Easton out as one of the few venues that truly puts the “town” in Town Center. “Easton never closes,” Peterson said. “People are still leaving the bars at 3 a.m., and by 5 a.m. a hundred-plus mall walkers arrive.”

Its bus station shuttles New Yorkers back and forth from the Port Authority Terminal several times a day. It has a visitor center with a staff that can direct shoppers in 14 different languages. And now it has a 65,000-sq.-ft. Market Hall as its entry way and a themed sections celebrating New York State regions like its own Hudson Valley, the Hamptons, and the Adirondacks. Woodbury Common, the flagship of Simon Premium Outlets’ value-priced luxury fleet, is a destination for Upper East Siders as well as residents of the Far East. And it recently completed a three-year project designed to keep a sharp edge on its world-class experience — not the least aspect of which was a new ring road making ingress and egress safer and quicker.

“We have a mission — value, fashion, and experience. Every decision we make as a company is influenced by that, and I don’t think it plays out any more clearly than it does at Woodbury,” said Simon Premium Outlets CEO Stephen Yalof.

#5.The Grove and Uber

“If you got it, go with it!” That’s what Jackie Gleason’s Ralph Kramden character would say whenever he thought he’d hit it big on one of his get-rich-quick schemes. Well, the Grove in Los Angeles has really got it. With average sales per-square-foot of $2,200, the luxe retail site is No. 2 on Fortune’s list of top-grossing shopping centers. But having to traverse acres of parking lot a
Advertisement