Average asking rents along 16 high-yield retail corridors in Manhattan were $688 per square foot during the quarter ending on June 30. This was the 11th consecutive quarter that recorded a fall in retail rent and marked the first time the figure has dropped below $700 since 2011.

A report from CNBC said that similar scenarios are playing out along other urban High Streets like Rodeo Drive in Los Angeles, the “Magnificent Mile” on North Michigan Avenue in Chicago, and the Las Vegas Strip.

Naveen Jaggi, president of JLL's Retail Advisory, told CNBC that more and more retail real estate space is going to be taken up by non-luxury brands. “Take Fifth Avenue. You see a Vans, a Five Below, and a Timberland. Those kinds of brands are the ones taking space,” he said.

Rents on Fifth Avenue, the highest retail rents in the nation, began to falter before the pandemic. Now the largest declines are coming in SoHo, where the monthly dues for tenants on Prince Street dropped below $500 for the first time since 2014. Rents in the boutique bazaar lining Madison Avenue from 57th Street to 72nd Street have fallen by 15% to an average of $882 in the past year.

Gotham rents at the highest end of the spectrum held their ground, however, according to JLL. That would be Fifth Avenue in the 50s, where tenants such as Tiffany’s, Bergdorf Goodman, Louis Vuiton, and Cartier continue to pay an average of $3,000 per sq. ft. 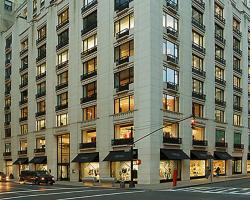