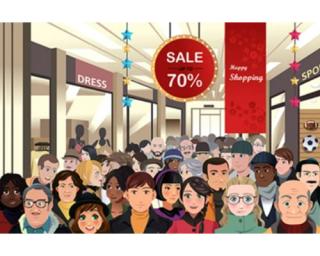 Retail inventories that are 65% higher than last year will mean big bargains for holiday shoppers.

So says foot traffic data provider Placer. ai in a new report that predicts that early and aggressive sales aimed at moving mountains of merchandise out of stock rooms will lead to a resurgence in traffic from October through the end of the year.

UBS Group AG analysts recently reported that North American inventories grew by 65% in the fiscal first quarter and are at their highest level relative to sales since the start of the pandemic,

Brick-and-mortar shoppers fell off in September, according to Placer.ai. Indoor mall and open-air lifestyle center traffic were off 5.3% to 6.8% in August compared to 2019 numbers.

Outlet center traffic, meanwhile, picked up by nearly one percentage point in September.

“Issues with excess inventory could push more products to retailers such as the off-price segment and could drive some brands to offer the types of major discounts that privilege stores for distribution,” said Placer.ai VP of marketing Ethan Chernofsky.

When compared to 2021, however, indoor malls were less than a percentage point behind and open-air centers fell back by less than 2%. Outlet centers were down by 4.5% -- but that turnout represented a dramatic recovery from July, when they were 8.6% behind last year’s numbers.

Week-over-week comparisons in all three retail real estate sectors for the week of September 19, however, tracked upward for the first time since the first week of August. Crowds were 2.5% higher than last year for malls and open-air centers.

“The timing here is crucial as it indicates that the shopping patterns seen last year with lifts in early holiday shopping could be repeating again in 2022,” Chernofsky said.

These traffic counts come from Placer.ai’s Mall Indexes, which draw information from 30 million devices in reference to more than 100 top-tier indoor malls, 100 open-air lifestyle centers and 100 outlet malls across the nation.