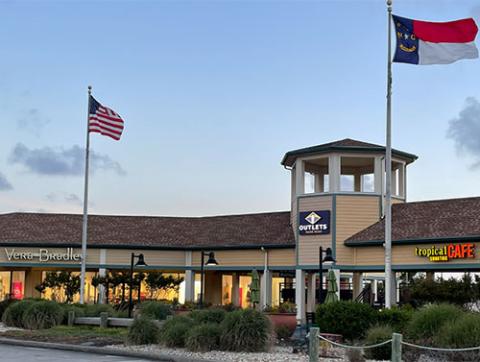 David Hinkle maintains that the outlet center was the original DTC retail model, in that it was the first retail sector that had top consumer product brands managing stores with inventories composed entirely of their own product lines.

Retail executives fine-tuning their omnichannel operations may have aligned their thinking with that of Hinkle, principal of The Outlet Resource Group. TORG this week reported having filled 98,000 sq. ft. in the six outlet centers it operates for Singerman Real Estate during the first half of this year.

The 14,590 sq. ft of space it leased at Outlets Nags Head registered a 100% occupancy rate for that center in North Carolina’s Outer Banks. New brands on the tenant roster are Aerie, Champion, Sperry, and Bros., a popular local restaurant brand.

Outlet centers have all been fortifying and improving their food and beverage components, and TORG is no different. It’s leased more than 10,000 sq. ft. of space in widening its dining option with operators that include Tokyoroll at Lincoln City Outlets in Oregon, Brielle’s 2 Geaux and Totally Tea at OKC Outlets in Oklahoma City, and Tapville Social at Westbrook Outlets in Connecticut.

Uncommon outlet sellers have shown up, as well.  At Outlets Williamsburg in Iowa, Cove Equipment and Williamsburg Community Child Care Center have taken up residence.

TORG focuses on the acquisition, management, marketing, and leasing of outlet shopping centers in the United States, Latin America, and Europe. Other outlet centers it manages in the United States Outlets Park City, Outlets Ocean City in Maryland, and The Outlets of Grand River in Alabama.