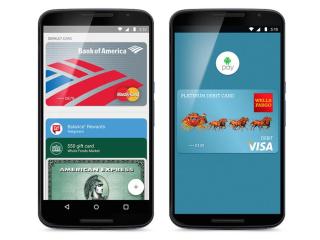 Mountain View, Calif. – Apple Pay has a new rival, and it’s a formidable one.

In its second take on mobile payments, Google is officially releasing its Android Pay digital payment solution to users of Android devices in the U.S.

In a Sept 10 posting on the official Android blog, Google said Android Pay will allow users to pay for purchases via their Android phones at more than 1 million locations in the U.S., as well as store gift cards, loyalty cards and special offers. It will start rolling out gradually during the next few days, and is compatible with NFC-enabled Android devices running KitKat 4.4 or higher.

As an NFC-based digital payment/wallet solution, Android Pay operates similarly to Apple Pay. Users tap and pay at NFC-enabled checkout terminals. Security is provided by tokens that replace consumer credit card numbers with virtual numbers during the transaction. Consumers will receive an immediate transaction confirmation on their device, and like Apple Pay will be able to remotely reset passwords or wipe their personal information. Recent transactions will also be available for reference.

Android Pay will support credit and debit cards from the four major payment networks: American Express, Discover, MasterCard and Visa. Issuing banks and credit unions currently include American Express, Bank of America, Discover, Navy Federal Credit Union, PNC, Regions Bank, USAA, and U.S. Bank. Citi and Wells Fargo will be available in the next few days, and Google promises Capital One is coming soon, with other issuing banks to follow.

Participating retailers include GameStop, Macy’s, Staples, Office Depot/OfficeMax, Rite Aid, Walgreens, Whole Foods and Toys “R” Us, to name a few. Currently only in-store POS transactions are supported, but mobile payment via app, as well as loyalty card and special offer redemption, will be offered in the future.

Users of the existing Google Wallet app will have it automatically shifted to Android Pay. Google Wallet will still be offered as a means of making payments among friends and family.

For new users, Android Pay will be available for download on Google Play in the next few days, and will come preinstalled on new NFC-enabled Android phones from AT&T, T-Mobile, and Verizon Wireless. Sprint customers will be able to download Apple Pay manually.

With Samsung Pay due for U.S. launch at the end of the month and Android Pay finally a reality, mobile payment may finally start experiencing the growth experts have been predicting since Apple Pay launched a year ago. It is rare for any market to have three leaders, so if mobile payment does take off, at least one of these companies may not enjoy the ride.