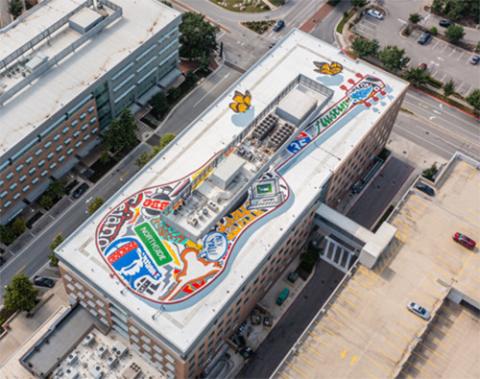 This Texas six-stringer hits a high note in Austin.

Austin has statues of both Stevie Ray Vaughan and Willie Nelson holding guitars. But neither of these big stars’ axes are as big as this one.

Northwood Retail decided to put a 30,000-sq.-ft. mural of a guitar on the roof of Perry’s Steakhouse at its Doman Northside center in the molto musical town in Texas. And Texan the six-stringer sure is.

On it are pictured Willie (No Stevie Ray?), a Dell computer, the University of Texas Longhorn logo, an I-35 sign, and bats—who are about the only passersby aside from helicopter pilots and neighboring office workers likely to see it.

The mural, which was created by Tucson artist Ignacio Garcia, can be viewed on Google Maps, according to Northwood, which also intends to use it the roof for events, live-streamed concerts, and music videos.

“We’re incredibly blessed with Domain Northside in Austin – it’s such a dynamic, mixed-use project, and we’re always trying to create a next-level environment” said Northwood President Ward Kampf. “If you’re in the commodity space in retail, you’re going to get killed. You’re going to fight on price every day. People want unique and special offerings and experiences.”

Domain Northside’s Rock Rose has become a haven for foodies and bevvies, who line up at Wonder Bar, The Dogwood, Lavaca Street Bar, and Kung-Fu Saloon. Its more than 130 retailers include RH, Apple, Nordstrom, Sephora, Vuori, Warby Parker, Kiehl’s, and Swarovski.