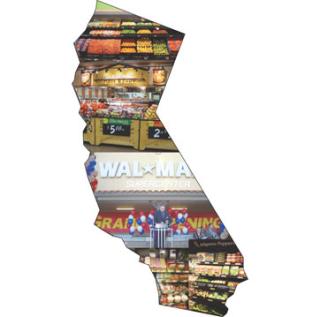 PALMDALE, CALIF. —After encountering early opposition to its plan to open 40 supercenters in California in a five-year span, Wal-Mart has picked up steam and should achieve a goal that seemed out of reach when it began in 2004.

Wal-Mart now has close to 30 supercenters open in California and many more in the planning stages that are due to open later this year and in 2008. And it’s been able to open stores at a rapid clip with a shift in strategy and less opposition from old foes like the United Food and Commercial Workers Union.

Wal-Mart opened its first California supercenter in the city of La Quinta in March 2004, and recently opened its 29th on Aug. 29 in Palmdale, Calif., a city of 140,000 about 50 miles north of Los Angeles in the high desert. The new supercenter is an expansion of an existing store and made Palmdale just the second city in California with two supercenters.

Analyst George Whalin said Palmdale is a good example of the communities Wal-Mart has targeted in recent years after some early efforts to open near larger cities failed. “I think the main reason they’ve been more effective is that they’re choosing less congested areas, like desert cities, to open their supercenters,” said Whalin, president of Retail Management Consultants in San Marcos, Calif. “And most of those communities need the jobs and tax revenues that Wal-Mart brings so they’re much more receptive.”

Wal-Mart didn’t find large cities like San Diego, Los Angeles and San Francisco very receptive when it first announced plans to open supercenters in the state in 2003. All three cities passed “anti-big-box laws” designed to keep them out and were backed in most cases by local chapters of the UFCW, which didn’t want Wal-Mart taking business away from its supermarkets.

A look at Wal-Mart’s 29 supercenters in California shows a heavy concentration away from those cities —with the exception of the multi-level store in the Baldwin Hills section of Los Angeles—and a heavy concentration in the central part of the state in small cities like Hanford, Gilroy and Dinuba.

At the Palmdale opening, Wal-Mart regional market manager Mickey Anderson said the chain finds it easier to open supercenters in those areas mainly because space is easier to come by. “Land availability always plays a key role when you’re talking about a store of this size,” said Anderson, who manages a region outside of Los Angeles that is home to 10 discount stores and five supercenters. “But we have moved into more densely populated areas like Rosemead and Pico Rivera so we are going to more urban areas when land is available.”

And with land becoming more expensive even in remote areas, Wal-Mart is finding it easier to expand existing stores to create supercenters rather than open new ones (the Palmdale store required just an additional 38,000 square feet). It also attracts less attention from would-be opponents. Wal-Mart is receiving little opposition on new expansions that are in the planning stages in cities like Oceanside and Vista, north of San Diego. “Expanding discount stores into supercenters seems to be a better way to go,” said Whalin.

Staying under the radar works better for Wal-Mart, something it learned early on. After being rebuffed in its efforts to open a supercenter in Inglewood, Calif., in 2004, it put the matter on the ballot only to have it shot down by voters. It tried a similar tactic in the city of San Marcos 90 miles south only to have it turned down as well.

In both instances, the UFCW worked behind the scenes to defeat Wal-Mart, but these days the union seems to have lost interest in its old foe. The UFCW recently wrapped up six months of talks with supermarket chains Albertson’s, Kroger and Safeway to sign a new four-year contract for employees and avoid another crippling strike. And it’s become focused on battling the pending invasion of Tesco, the British supermarket giant that plans to open its first store in Southern California this fall and more than 100 in the next year.