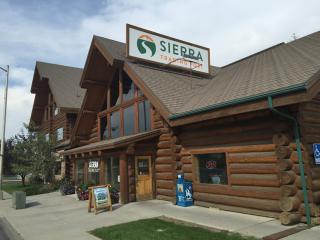 Sierra Trading Post, an online retailer TJX Cos. acquired in 2012, is accelerating store expansion and could become a new growth driver for the nation’s leading off price retailer with designs on extending its value proposition to the outdoor and active lifestyle world.

TJX paid $200 million for Cheyenne, Wyoming-based Sierra Trading Post in December 2012. At the time, Sierra operated four outlet stores (in Wyoming, Idaho and Nevada). After 18 months under TJX ownership, Sierra st opened new stores near Denver in August 2014, in Fort Collins in October 2014 and in Colorado Springs in October 2015.

More recently, TJX has begun expanding the Sierra Trading Post concept to new markets nationwide and talking openly about growth potential. Last November, a Sierra store opened in Burlington, Vermont, and in May a new location will open in Salt Lake City.

In the third quarter, TJX will open a Sierra Trading Post stores adjacent to a Home Goods stores in a former Kmart location in Ann Arbor, Michigan. In total, TJX plans to open five Sierra stores in 2016 and president and CEO Ernie Herman has alluded to bigger things to come.

“We are very happy with the early reads in our new Sierra Trading Post stores, and we would be thrilled for STP to eventually become a fourth major chain in the U.S. and Canada,” Herman said during a conference call after TJX reported record fourth quarter results.

“Sierra Trading Post is a growth vehicle for TJX, moving the once online only concept to bricks and mortar,” Hurwitz said during Brixmor’s first quarter earnings call. “This will be their first location in Michigan as well as in our portfolio, and we look forward to expanding our relationship with Sierra Trading across our entire portfolio.”

Brixmor operates more than 520 shopping centers, the majority of which are anchored by a supermarket.

TJX doesn’t need to ramp up expansion of Sierra Trading Post anytime soon, give that it still has abundant growth potential for its TJ Maxx, Marshall’s, Home Goods and other concepts. The company ended last year with 3,614 stores and plans call for 195 new stores worldwide this year. According to Herman, the company sees the potential to grow by more than 50% to 5,600 stores long term, just with its existing chains in existing countries.