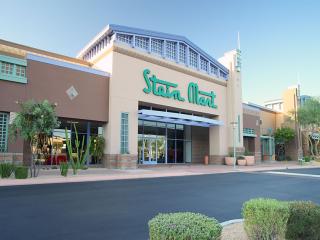 The chief executive of Stein Mart has stepped down after only some six months on the job.

The off-price retailer announced that Dawn Robertson resigned as CEO and as director of the company’s board, effective Sept. 27, 2016. She also served as chief merchandising officer. Stein Mart president and CEO D. Hunt Hawkins, a 20-year company veteran, was named interim CEO.

Robertson was appointed CEO of Stein Mart in March 2016. She succeeded Jay Stein, the company’s founder and long standing CEO, who remains chairman. Prior to joining Stein Mart, Robertson was the chief executive or president of several other retail companies, including UNKNWN, Deb Shops, Nygard International and The Avenue. Prior to that, she held various executive positions at Old Navy, Myer Stores, Federated Department Stores, Saks and May Department Stores.

Stein Mart, which operates 282 stores, gave no reason for Robertson’s abrupt exit. But in the release announcing her departure, it gave a preview of its third quarter and said same-store sales were down approximately 4%, and noted “missteps.” Also, interim CEO Hawkins stated: “We believe that several of the new merchandising strategies that have been developed this year will positively impact our future sales. However, implementation has been too rapid and has been challenging for our customers. It is important that we remain focused on meeting the needs of our existing customers as we drive change."

Hawkins, 57, started his career with Stein Mart as senior VP, human resources and was promoted to executive VP of operations in 2006. He went on to assume positions of increasing responsibility was named president and COO in 2014.

Stein Mart said it would initiate a search for a new chief merchandising officer.