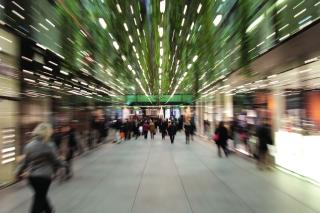 On Nov. 4, 2013, a man with a rifle walked into a mall just before closing time and fired several shots into the air. The gunfire terrified shoppers at the Garden State Plaza in Paramus, N.J., and sparked a massive police response, followed by a tense six hours as cops searched for the gunman and evacuated panicked employees and customers. The gunman eventually shot himself in the head in a secluded part of the 2.1 million-sq.-ft. mall.

Over the past decade, shooting attacks at shopping centers and other public places have more than doubled. In 2001, researchers counted five shooting events that occurred in public places and involved victims who did not know the shooter. Between 2009 and 2012, the rate of those shootings tripled, to about 15 a year.

To be sure, the chance that a shooting will erupt at any particular public place is small. Still, the number of attacks is growing. Add to that the growing threat of terrorist attacks on public spaces. The armed assault on the Westgate Mall in Nairobi, Kenya, in September 2013 killed 67 people and injured more than 175, highlighting the vulnerability of shopping centers.

Moreover, the threat of terror attacks is rising around the world, according to U.S. Senator Dianne Feinstein of California, chair of the Senate Intelligence Committee.

“Today, there are more al Qaeda affiliates than ever,” Feinstein said on CNN’s “State of the Union” on Dec. 1, 2013. “All aspire to commit acts of violence in the United States.”

In the wake of the Westgate attack, the New York Police Department sent a team to Kenya to gather intelligence and do its own analysis of the horrific events. It released its findings in a report, which it shared with attendees at the 30th annual NYPD Shield Conference in December. The report emphasized the relative ease with which the attack was carried out and the chaotic law enforcement response, which was hampered by lack of communication and poor planning.

“It ... clearly illustrates that armed assaults by terrorists on ‘soft targets’ ... are a simple, effective and easy-to-copy tactic,” the report stated.

Shopping center owners — particularly those with portfolios containing major regional shopping centers and malls — have begun to take steps to protect retailers and shoppers should an attack occur.

There are a number of things owners can do, according to Lander. Here are some tips:

Start by developing relationships with the fire and police departments that protect the property. Talk to architects experienced with building design aimed at facilitating security. Consider new technology. Train tenants to contribute during an emergency.

“Call the community relations and crime prevention officer at your local police department and offer space in your shopping center or mall for a police substation,” Lander said. “Having lots of police cars parked in the lot makes an effective deterrent.

“Invite the fire department and SWAT team to the center to conduct drills. Ask them to do it at night when shoppers aren’t around.”

Shopping centers often shy away from this, but it is useful for an incident commander and officers to know your facility, Lander added.

An architectural technique that owners can apply is crime prevention through environmental design (CPTED).

CPTED-trained architects use bollards, planters and other barriers to keep vehicles away from buildings, with landscaping that trims back shrubbery and plantings to eliminate hiding places next to buildings. Site design focuses on something called natural surveillance — maintaining sightlines and clear views that prevent armed criminals from approaching a building unobserved.

It includes two high-definition, audio-enabled cameras connected to a network appliance that sends video clips to a cloud website monitored by Tyco, as well as mall security.

One to several Tyco units positioned in common areas can support existing surveillance systems with video and audio analytics that identify specific actions and sounds. The audio analytics will alarm on angry voices and gunshots and send audio and video clips to the cloud. Monitoring personnel will check the video, and if necessary notify security and the police.

Shopping center security directors training to respond to an active shooter or a terrorist attack are planning two basic responses: evacuating and sheltering in place.

“The first priority is to get people out of danger by evacuating or moving into a place of shelter in the mall,” said Bud Bradley, VP national account portfolio management with AlliedBarton Security Services, Conshohocken, Pa., one of the largest suppliers of shopping mall security personnel.

“Should there be a major disturbance in a shopping center, we want the merchants to gather shoppers and lead them out of the center along a safe evacuation route,” Bradley continued. “If the evacuation routes are blocked, then we ask the merchants to gather shoppers into their stores, pull down and lock the gates, move everyone into the storerooms in the back and lock the doors.”

One challenge associated with the decision to evacuate or shelter in place involves communicating the decision — which might vary for different wings of a mall. People in one wing may be able to get outside to complete safety, while people in another wing will have to find shelter.

“Most malls don’t have public address systems,” noted Bradley. “Then again, if there is a terrorist attack or an active shooter, you probably don’t want to make a PA announcement for all to hear.”

What about a mass notification system that emails and texts retailers with instructions to evacuate or shelter in place? There has been a lot of discussion of mass notification systems, Bradley said. But there are drawbacks. Someone has to learn how to send the right messages to the right tenants as soon as the decisions have been made. Further, given the rate of turnover in retail, the mass notification manager in a large center would likely spend a lot of time checking to see which contacts have quit and keying in replacement phone numbers.

By the time the police arrive, an evacuation or shelter-in-place plan may be underway, and the security team will shift its focus to supporting the police in the command center. Security personnel can provide police with directions to shopping center locations, scan video surveillance cameras to handle the evolving situation and other tasks.

Experience shows that planning doesn’t work unless everyone involved — security and retailers, in this case &mdas