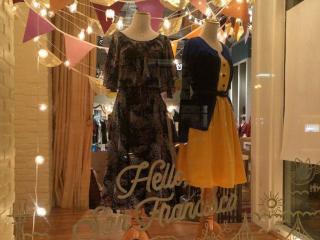 ModCloth is going on tour this summer.

The online apparel retailer known for its indie and vintage-inspired styles is launching the “ModCloth IRL (in real life) Tour,” a series of five pop-up shops.

The IRL shops are modeled after ModCloth’s first-ever physical outpost, a pop-up in San Francisco. The store opened last July and is due to close March 26.

The first of the IRL pop-ups will open in April, in Austin, Texas. The tour will end in September, in the company’s home town of Pittsburgh.

The Austin pop-up will debut on Friday, April 8, and feature a curated collection of ModCloth styles, including dresses, separates, shoes, graphic tees, and accessories, as well as exclusive swimwear, one-of-a-kind vintage home decor, and offerings from local artists. It will remain open through Memorial Day, May 30, and will also host a series of community events.

Shoppers will also be able to make personalized appointments with on-site stylists.

In February, ModCloth hired three new executives to help it move into physical retailing and build an international presence. The appointments included Elizabeth Cooksey to the new position of VP of stores and retail operations. Previously, she served as senior director of stores, Nike, North America, and, prior to that, was director of wholesale merchandising and retail development for Free People, a division of Urban Outfitters.