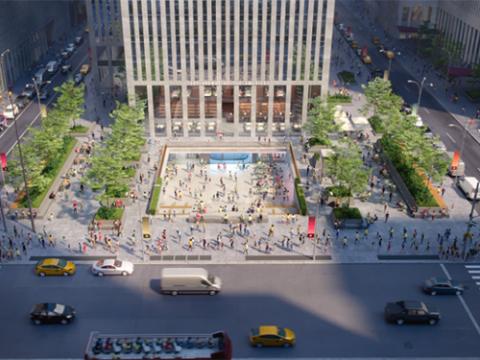 65,000 sq. ft. of retail space will soon become available in one of Manhattan's most highly trafficked areas.

The 115-ft. long plaza that distances what once was the McGraw-Hill Building from the Avenue of the Americas in Manhattan is being converted into a meeting place that will feature 65,000 sq. ft. of retail space.

The Rockefeller Group -- which built and owns the property across the street from Radio City Music Hall-retained the Milan-based architectural firm Antonio Citterio Patricia Viel to transform what it considered underutilized space into an inviting traffic-builder. The street level will be connected to the concourse level with a large staircase, and stadium seating is being installed to invite tourists and lunching office workers to relax there.

"Reimagining our central business districts will be an all-hands-on-deck effort, one that will require investments not just in the buildings but also in the neighborhood as a whole,” commented New York City Mayor Eric Adams in a press release outlining the under-construction project due to open before the end of the year.

No tenants have been signed to occupy the retail space on the concourse that was once occupied by the McGraw-Hill bookstore and the New York Experience Theatre. But Eric Gelber, the CBRE executive who’s leading the leasing effort, expects much interest.

"It's hard to imagine a comparable retail opportunity in North America that offers such a strong backdrop to display a brand on the world's stage," Gelber said. "The building attracts a wide range of populations, from daytime office workers to locals and tourists. It's a saturated cross-section difficult to find anywhere else in New York City."

The building at 1221 Avenue of the Americas is the “Y” of the three “XYZ Buildings” built during the expansion of Rockefeller Center in the late Sixties and early Seventies. All three are similar international-style designs flanked by red granite piers and all are recessed from the street by concourse plazas. Most Americans are familiar with the buildings as they are seen in the title sequence of Saturday Night Live.

Rockefeller Group executive VP Bill Edwards says the renovation reflects a fundamental change in the nature and traffic of the area.

"Space that was once designed for corporations has been adapted for new uses and we're thrilled to have this blank canvas for innovative brands to explore and the public to enjoy," Edwards said.