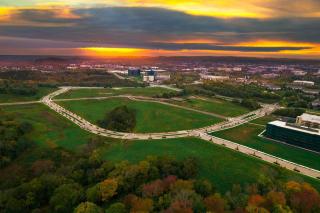 A 60-acre mixed-use center is planned for this site in Franklin, Tenn.

Toro Development Company (TDC), which announced its first project in September, is ready to get started on No. 2.

The company, whose executive team developed Alpharetta, Ga.’s ground-breaking Avalon center while with North American Properties, has teamed up with Highwoods Properties and Ignite Realty Partners to develop a mixed-use community called Ovation on the campus of Mars Petcare’s headquarters in the Nashville suburb of Franklin, Tenn.

Highwoods, which developed and owns the 224,000-sq,-ft. Mars property, will serve as master developer for Ovation and deliver its office component. Toro will build a “mixed-use village” containing retail, multifamily residential, and hotel. Ignite’s Open Realty Team—which curated the tenant mixes at the Legacy West and Music Lane developments in Texas—will curate the retail base.

“The City of Franklin, primed for its own destination, has experienced record population and job growth over the past five years, and we intend on creating the cultural and gathering hub of the community,” Open Realty’s Mark Masinter.

The town was the site of the Battle of Franklin during the Civil War, one of the conflict’s bloodiest battles costing more than 8,000 lives. It’s now a thriving and growing community of more than 85,000 with average household incomes topping $120,000.

Its high income and population growth position Franklin as a prime location for the type of fashionable, retail-dining-and-experience-filled centers that TDC specializes in.

“This is one of the few sites in America that has the right fundamentals in place to support a dense, ground-up mixed-use development akin to Avalon in Alpharetta, Georgia,” said TDC principal Mark Toro.

“Franklin is craving its own third place, a place outside of home and work where people can gather and celebrate life’s special moments,” Toro said.

Early plans for Ovation will include resort-level concierge services, greenspaces, walking paths,  and public spaces to contain hundreds of community events every year.

“We are moving forward to build upon the foundation we’ve laid with Mars Petcare to create the most compelling address to live, work, and play in greater Nashville,” said Highwood’s Nashville Market Leader Alex Chambers. “We will create one of these great places in one of the most dynamic real estate markets in the U.S.”