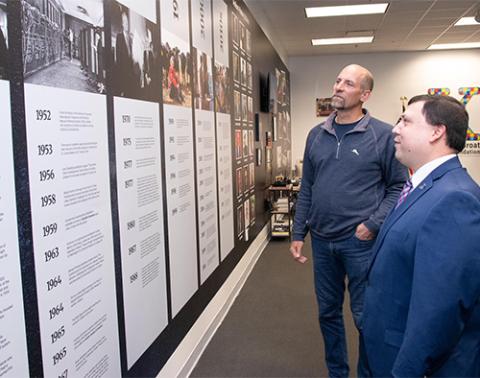 Albert Einstein and Andy Warhol are familiar names in science and art museums, but both now appear in a museum you’d not expect to find them—especially since this museum is seen to be unique.

The Autism History Museum at Meridian Mall in Okemos, Mich., was the idea of Xavier DeGroat, a former White House intern who started a foundation to increase opportunities for people with autism. Diagnosed with Asperger’s Syndrome at the age of four, DeGroat, now 31, studied politics and communications in college and set out on a mission to help unite people on the spectrum with mainstream society. And vice versa.

“My museum is meant to educate families and children with autism about their history on the spectrum,” DeGroat said. “People learn about the culture and social history of autism going back to the early 20th Century when it was thought to be overlapping with schizophrenia.”

But the 1,400-sq-ft. space is also designed as a haven for autistic visitors to the mall. Autistic children can get anxious in public places, and DeGroat’s museum contains a sensory room with dimmer lighting, a fish tank, and stress-reducing toys like squeezy balls to help them get re-oriented.

The launch event for the museum at Meridian Mall, which is owned and operated by CBL Properties, was sponsored by fellow tenants Dick’s Sporting Goods and Launch Trampoline Park-- where the Xavier DeGroat Autism Foundation held a fundraising event last year.

“I met Xavier at the party and, while talking with him about the foundation, he told me about his idea for a museum and asked if we thought the mall would be a good place for it,” said Dan Irvin, general manager of Meridian Mall. “I have never met an individual as motivated and as passionate about his cause as Xavier. He stops at nothing to raise awareness of autism.”

DeGroat has been busy promoting his museum in the media. Fox News host and former Arkansas Governor Mike Huckabee hailed him on his show as one of “Huck’s Heroes.” Michigan native and Hall of Fame pitcher John Smoltz visited and made a donation to the museum. And on July 8, DeGroat will be back at the Launch Trampoline Park for a dinner featuring speaker Temple Grandin, a noted animal behaviorist with Asperger’s who was played by Claire Danes in the HBO movie, “Temple Grandin.”