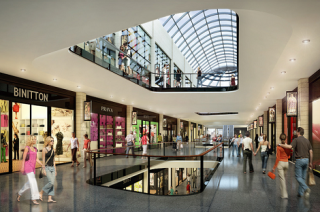 Malls all across the U.S. were impaired by shutdowns and stores closed by bankrupted retailers such as Neiman Marcus, Brooks Brothers, Lord & Taylor, and Modell’s Sporting Goods. Movie theater chains like AMC and Regal have re-opened, but only to limited, socially distanced audiences. Butler Enterprises announced just this week that the Regal Cinema at its massive center in Gainesville, Fla., would be re-opening on April 23.

Outside of industrial, all sectors of real estate continue to be affected by the pandemic. The City of New York this week released an estimate that the value of Class A office properties in Manhattan had fallen by 25%. Nationwide, the fall-off in office space value is pegged at around 16%.

The marked rise in e-commerce sales precipitated by the pandemic has national retailers snapping up warehouse space and other industrial venues for last-mile fulfillment of online orders. The price of industrial space is up by 10% and transaction volume in the sector rose by 20% in 2020 to 350 million sq. ft., according to CBRE.