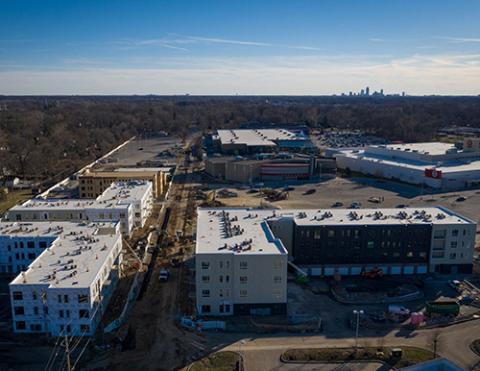 Residential rises on the grounds of Glendale Town Center.

When Glendale Shopping Center opened in 1958 with a concourse connecting the William H. Block and L.S. Ayres department stores, it was the city’s first mall. It was designed by Victor Gruen, the architect who had designed America’s first mall, Southdale Center, in Edina, Minn.

Glendale became the town’s primary shopping destination, but it ended up losing many of its key tenants to The Fashion Mall at Keystone in the 2000s. In 2007, the original structure was demolished and Glendale survived as an open-air center.

Now Glendale has entered its third phase. Kite has partnered with Milhaus, a national developer of residential buildings, to build a 267-unit apartment complex in an under-utilized parking lot called AYR.

“We are proud of the important role Glendale Town Center has historically played in the city of Indianapolis,” said Kite president Tom McGowan. “Glendale shows that great real estate will continue to evolve and provide value to the surrounding community.”

New bike lanes will be added to the project along with a public art component and green spaces. Additionally, more than 50,000 sq. ft. of a former Macy’s is being redesigned as a new home for Ross Dress for Less, Old Navy, and Five Below at the center.