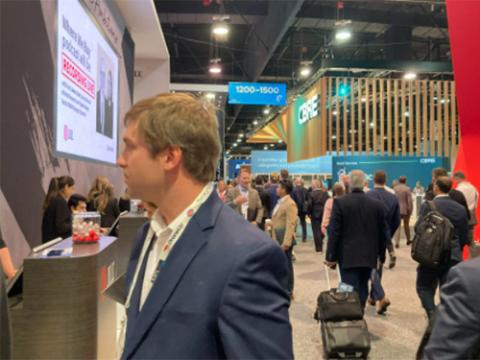 COVID-stymied retail real estate association ICSC got back into the show business in Las Vegas last December with an event that was a success though attendance ebbed at just 10,000. But this week’s show, back in its usual late May dates, is brimming with a closer-to-normal crowd.

“It’s as good as it’s ever been. There are a lot more retailers here this year than we’ve seen in a while,” said CBRE’s senior managing director of retail advisory services Bill Wright in his company’s expansive booth, packed with more than a hundred people. “We’re getting a sense of greater excitement across the industry.”

Similar to Wright, Joe Cosenza, president of Inland Real Estate, which made more than $3 billion in acquisitions in 2021, also felt the rumblings of greater activity in retail real estate.

“There are so many companies filling up new retail space. Athleta, TJX, Crumbl Cookies…we’re seeing Ulta Beauty looking for 6,000-sq.-ft. spaces, which is something we’ve never seen,” Cosenza said.

JLL chief economist Ryan Severino said retail revenue was stimulated by federal stimulus payments to Americans and, while he foresees unpredictable challenges ahead posed by supply-chain issues and Russia’s Ukraine offensive, he believed the U.S. economy would return to normal in time.

“There’s a good chance that, within 12 to 18 months, inflation will spike and then fall way back down. That’s what happened in the Great Recession and it’s likely what will happen now,” Severino said.

Fred Meno, president and CEO of asset services at The Woodmont Company noted that a lot of ifs had to be resolved before the economy settled down.

“I see a potential problem facing us in respect to rising credit card debt,” Meno said. “If there’s a big drop in disposable income, retail is always the first to take the hit.”