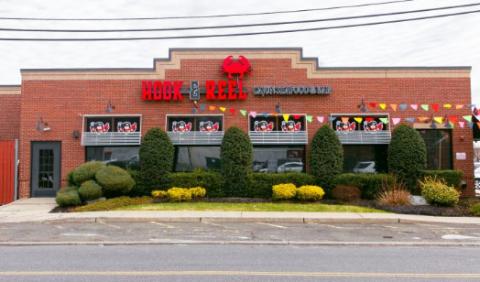 Pandemic or no, Hook & Reel continues an aggressive expansion to nearly 70 locations.

The Feil Organization’s renovation of Concourse Plaza, a 311,000-sq.-ft. center four blocks from Yankee Stadium in the Bronx, continues four years after it began.

Hook & Reel, a fast-growing Cajun seafood chain, has signed a 15-year lease for a 5,656-sq.-ft. space at the center where the concept’s franchising organization currently operates the Hibachi Grill & Supreme Buffet. Hook & Reel has grown its national footprint by more than 30 stores over the past two years to a total approaching 70 locations.

"The leasing of a second restaurant location for this tenant in the same center, even during the COVID-19 pandemic, indicates the strength of a shopping center, serving both a densely populated community and the Bronx courthouse," said Feil’s VP of leasing Randall Briskin.

Feil completed an $18 million re-do of Concourse Plaza in 2016, which included a renovation of the 51,680-sq.-ft. Food Bazaar--one of the Bronx’s largest grocery stores-- and the re-tenanting of the center with brands including Kidstown and Rainbow Stores.

According to Feil, the center has access to 1.2 million consumers in a three-mile radius.