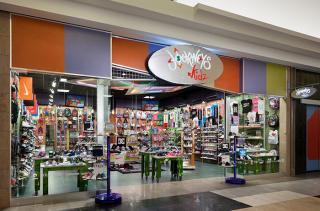 The company, whose divisions include Journeys, Johnston & Murphy and Schuh, reported net income or $577,000, or 4 cents a share, for the quarter ended Aug. 3, compared to a loss of $15,000, or breakeven on a per-share basis in the year-ago period. Adjusted earnings a share was 15 cents, compared with the analysts’ estimates for a loss of 1 cent a share.

Sales slipped to $486.6 million from $487.0 million, below estimates of $489.2 million. Same-store sales rose 3% ahead of Street expectations. Same-store sales increased 4% at Journeys and 1% at Johnston & Murphy.

Journeys was a key driver in Genesco's "outperformance" during the quarter, according to Genesco chairman, president and CEO Robert J. Dennis.

“Our outperformance was driven primarily by the ongoing strength of our Journeys business, which continued to experience strong comparable sales even as year-over-year comparisons became more difficult,” said Dennis. “At the same time, gross margins improved at each of our divisions, helping offset incremental marketing investments to achieve operating profit and earnings per share well above last year's levels. The second quarter marked the ninth consecutive quarter of positive consolidated comparable sales for our footwear businesses and included positive store and digital comps.”

In December, Genesco sold its struggling athletic headware business, Lids Sports Group, to FanzzLids Holdings (with sports licensing and e-commerce firm Fanatics Inc. making a minority investment in FanzzLids as part of the deal) as part of an effort to sharpen its focus on its core footwear business.

“Our recent performance represents a great start to our first fiscal year as a footwear-focused company and we believe that the strategic course we have set for Genesco will result in improved profitability and increased shareholder value over the long-term,” Dennis said.