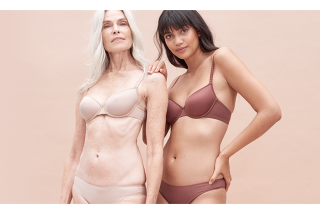 Victoria’s Secret’s competition keeps growing. ThirdLove, the online women’s bra and underwear brand known for its inclusive sizing and messaging has completed a $55 million fundraising round.

The round was done preemptively by L. Catterton (owned in part by LVMH and Groupe Arnault) and investment bank Allen & Company, along with prominent women “angel” investors Anne Wojcicki, co-founder of 23 and Me; Susan Wojcicki, CEO of YouTube; Katie Couric, journalist and TV personality; and Nancy Peretsman, managing director of Allen & Company who participated independently of the bank. The round brings the company's total funding to $68 million and, according to TechCrunch, bumps its valuation up to over $750 million.

Third Love launched in 2013, with a mission to offer comfortable but stylish bras designed for women by women, with an unusually broad range of size offerings that includes half sizes. Its online site is designed with the latest in technology that helps women find their best-fitting bra size and style. It currently offers a total of 78 bra sizes.

The company said it plans to use the new funding to introduce more sizes, expand its product offerings and further build out the technology it uses to ensure a better fit.

“This new funding round allows us to continue delivering on ThirdLove’s mission to create a bra for everybody,” said co-founder and co-CEO Heidi Zak. “We are more dedicated than ever to giving all women the level of choice they deserve. We recently increased our offerings to a total of 78 bra sizes in five beautiful styles and we have no intention of stopping here.”

Third Love’s body-inclusive messaging has won it a strong following. In September, the brand launched its first national advertising campaign, “To Each, Her Own,” which showed women of all ages, ethnicities and sizes. The company made headlines in November when it ran a full-page ad entitled “An Open Letter to Victoria’s Secret” in The New York Times. The letter was in response to some controversial comments made by Ed Rasek, an executive at L Brands, parent company of the lingerie giant, regarding the company’s annual fashion show.

"Your show may be a 'fantasy' but we live in reality,” Zak wrote. “Our reality is that women wear bras in real life as they go to work, breastfeed their children, play sports, care for ailing parents, and serve their country. It's time to stop telling women what makes them sexy — let us decide."

“I'm a big fan of ThirdLove’s mission to build a brand for every woman, regardless of her shape, size, age, ethnicity, gender identity, or sexual orientation,” she stated in the release announcing the funding. “ThirdLove promotes reality over fantasy and shows the spectacular beauty of all sizes, shapes and colors of women.”
Advertisement