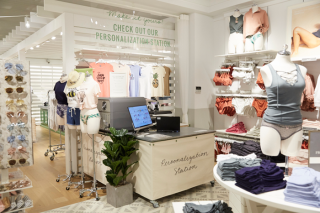 The apparel retailer overcame a slow start to finish strong, but its same-store growth still came in below expectations and it offered weak guidance.

Revenue rose to $1.04 billion from $965 million, topping analysts’ estimates of $1.01 billion. Revenue included $40 million recognized for license royalties from a third-party operator of AE stores in Japan, which contributed $0.15 of EPS in the second quarter.

In comments, analyst Neil Saunders said that Aerie is still taking market share across all the categories in which it trades,

“This includes from Victoria's Secret, thanks to Aerie's inclusive marketing and proposition which continue to resonate and pull in new customers,” said Saunders, managing director, GlobalData Retail. “We have noticed the brand being much more active on social media which we see as helpful in widening Aerie’s potential audience.”

In March, American Eagle said it plans to open 60 to 75 Aerie stores in its current fiscal year, including 35 to 40 standalone locations, with the remaining stores being side-by-sides with American Eagle.

In a statement, American Eagle CEO Jay Schottenstein said the company faced challenges in the second quarter that largely stemmed from underperformance in certain seasonal categories and a delayed start to back-to-school.

“Despite this, we delivered our 18th consecutive quarter of positive consolidated comparable sales growth,” he said. “We were also encouraged to see many areas of the business perform well, including continued strong momentum in AE Jeans, Aerie and our digital channel — all major growth priorities. Our brands remain strong and we are well-positioned to continue to grow and gain market share.”

The company is now expecting third-quarter same-store sales to rise in the low to mid-single digits. Earnings per share is expected at about 47 cents to 49 cents, short of the Refinitiv forecast of 52 cents per share.
Advertisement