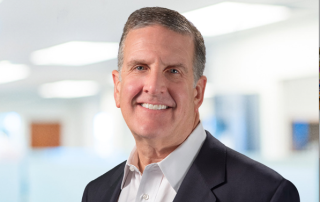 Tom Brown, the director of real estate acquisitions for Yesway, learned everything he needed to know about site selection for the fast-growing convenience store chain from Lonnie Allsup.

The late founder of the Allsup’s chain scouted sites by flying his airplane over highways in Oklahoma, West Texas, and his home state of New Mexico, looking for clusters of motor traffic surrounded by wide open spaces.

“Lonnie would put his store at the intersection of the Interstate and the state highway and buy all the open land surrounding the store for defensive purposes,” Brown said. “He was one of the first people in the convenience store business to build larger stores with food and grocery items. In recent years, it was easy for him to build a bigger store because he owned all the land around it.”

Brown and Yesway CEO Tom Trkla came to Yesway through their roles as the lead executives of  Brookwood, a private equity real estate investment firm that specializes in acquiring and managing value-add commercial real estate. Brookwood’s business premise is buying office buildings and shopping centers for 50 to 60 cents on the dollar when markets are down for their high-net-worth investors.

Brown and Trkla also buy operating companies and, when markets stabilize and property prices rise, they quit buying and start running the businesses. They chose to run C-stores because it was easy to learn how.

“It was shocking how willing other C-store companies were to tell us about their businesses,” Brown said. “They’re mostly regional. You have 7-Eleven and Couche-Tard and then you have the 65% of operators who own 10 to 12 stores.”

When first building Yesway, Brown eyed a big hole in the C-store doughnut in the Midwest. He bought a number of those 10-to-12-store chains in Iowa, Missouri, Kansas, and Nebraska and soon had a 150-store portfolio. Since then, he’s veered down south to Texas, Oklahoma, and New Mexico and purchased the Allsup’s chain from Lonnie Allsup’s family.

“That acquisition allowed us to hone our focus and see what we wanted to be when we grew up. One of the things we learned was that bigger in this industry was better than smaller,” Brown said. “We started developing stores that were 5,000 sq. ft and then got up to 8,000 to 9,000 sq. ft. That’s where we hit the pause button.”

With a goal to complete 48 stores this year, Yesway management decided that the way to get through all the supply chain delays and labor shortages was to become the biggest customer of a few companies. Yesway hired one architectural firm that promised it could design 100 stores for the chain.

It took on 10 contractors and promised each of them six or seven stores. Then it hired a group of five people to handle the permitting processes and one project management team to draw up the site plans.

“Because we are in rural locations, we don’t get a lot of headwinds obtaining permits from cities. They’re happy to have us. But we also took getting permits out of the hands of the contractors,” Brown said. “The big hurdles we face are the Oklahoma and Texas departments of transportation. They have mandates that severely limit the number of access points to highways.”

“We were buying steel from four or five guys. Then we went to two of them and said, ‘We’re going to give you a contract for X-amount of years,’ and now we have only two steel suppliers,” Brown said.

Ambitious development goals serve as powerful sledgehammers in getting stores built these days.

“I would hate to be out there trying to build just a store or two,” Brown opined. “Amazon sucked all the steel out of the market.”