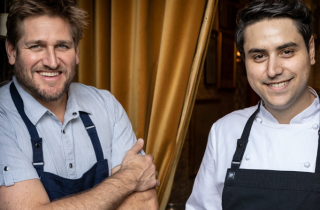 Chef Curtis Stone's (l.) Maude restaurant in Beverly Hills is one of the many L.A. dining establishments whose crowds are back to 2019 levels.

Workers continue to stay home rather than head back to offices in big cities, but tourists are beginning to flock to them.

A just-released JLL report titled “How shoppers have returned to the city” detailed that domestic tourist traffic in New York City is up 14% over 2019 and 186% over 2021. Traffic counts done by JLL and Placer.ai found that year-over-year traffic in 2022 was up by more than 70% in San Francisco’s Union Square, Chicago’s Fulton Market, New York City’s Fifth Avenue.

The return of weekday workers to major cities, however, is proceeding at a slower pace. As of the week of April, 27, 2022, office occupancy was under 40% in New York, San Francisco, Chicago, Philadelphia, and Washington D.C.

In Chicago, city foot traffic has rebounded to within 10% of 2019 levels, according to JLL, which named Fulton Market and Wicker Park as being more than 6% ahead of 2019. Michigan Avenue crowds, while 55% higher than last year, has yet to attain pre-pandemic traffic levels.

Hotels have begun to fill up again, with Miami being one of the biggest benefactors. Revenue per hotel room increased by 26% there in the first quarter and foot traffic in the city’s Design District has been well ahead of 2019 levels since last year.

Big cities are known for great restaurants and they continue to be leading traffic-grabbers, says JLL. Last year, dining establishments in Los Angeles served just half the number of patrons they did in 2019. This year, they are back to within 10% of their crowds from two years ago.

But most big city restaurants continue to lag far behind 2019 levels. San Francisco is off by 43%, New York by 39%, and Philadelphia by 38%.