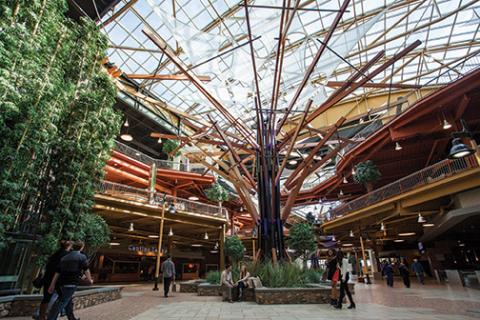 Pyramid Management Group this year announced plans to introduce residential developments across its 14-mall portfolio to increase traffic and activity and keep them viable. But multifamily apartments are an unlikely option at its mammoth Destiny USA mall and entertainment center in Syracuse, which finds itself in a seriously negative financial position.

According to a report on Syracuse.com, the 2.4 million-sq.-ft. property recently appraised at a valuation of $203 million owes $715 million to lenders. Several pathways could be taken by Pyramid to wend its way off this dangerous course, none of them easy.

According to the report, the owners of the sixth largest mall in the United States could appeal to lenders to forgive a significant portion of its debt from lenders. Institutional lenders and the Syracuse Industrial Development agency that hold the paper on Pyramid’s debt might be willing to absorb some of the lessened value on the property, but it might require Pyramid to put up more money to reduce the principal on the loan.

Pyramid could file for Chapter 11 bankruptcy protection and restructure its debt. That would allow it to keep the doors open to customers at Destiny and secure new tenants to close its thirty-percent-plus vacancy rate.

Or Pyramid could do what Simon and Brookfield did with some of their underperforming malls and return Destiny USA to its lenders. That would be a painfully difficult option for Pyramid CEO Stephen Congel to pursue, however. His father, Robert J. Congel, who built Destiny USA, died in February, and it was Stephen who led the revamping of the big mall into a retail-cum-entertainment center that draws international visitors from around the world.

A significant portion of Destiny USA customers come from Canada, but none have made the trip south since the country shut down its border during the pandemic. Canada and U.S. began talks this week about reopening it, and it would be unlikely for Congel to take any substantial actions concerning the property until that northern traffic flow returns.