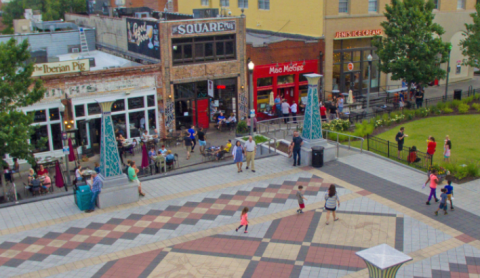 The Square in downtown Decatur, Ga., will soon be home to some first-time physical retailers.

The city of Decatur, Ga., home to two malls and 15 blocks of renovated commercial district downtown, wants to urge successful e-commers into its brick-and-mortar marketplace.

The city and the Decatur Downtown Development Authority have announced the launch of a retail recruitment incubator that will allow online-only businesses to test their concepts in a physical location for a six-month period.

The incubator will negotiate short-term leases for the retailers and give them physical retail training and mentorship from successful members of the local business community. DDA has committed $25,000 to finance the project.

“Our research showed similar programs have been very successful in places like Memphis and Dayton, Ohio, so we are excited for the economic growth and innovation this can spur for Decatur,” said DDA chair Conor McNally.

Online sellers must have spent two years in business and must submit a physical retail business plan to get a chance at the space. They also must have no more than 10 employees, pay for half their rent, and share income statements. The six winners will be announced on Sept. 15 and move into their stores by Oct. 15.

Decatur, a town of 20,000 people located just six miles northeast of Atlanta, is a retail-driven economy that includes the North DeKalb Mall, The South DeKalb Mall, and The Square, a renovated section of its downtown with more than 1.5 million sq. ft. of commercial space filled by dozens of assorted retailers and some 45 restaurants.

“From The Square to the Old Depot District, our economy is largely built on experiences, so the incubator is an investment both in our future and budding entrepreneurs,” said Decatur Mayor Patti Garrett. “This program signals Decatur is committed to bringing people back together and supporting the brick-and-mortar retailers that make our culture second to none.”