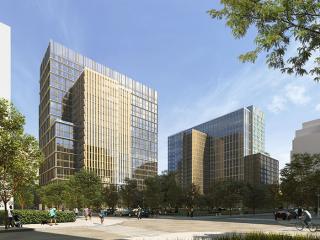 Amazon is providing a preview of some of the features of its new second headquarters.

The e-tail giant has filed proposed development plans of its new campus, popularly known as “HQ2,” in Crystal City, Virginia. HQ2 is part of the Metropolitan Park site, an existing urban renewal and development project in an area of Virginia known as National Landing.

The first phase of Amazon’s “ground-up” construction will include the redevelopment of a block of vacant warehouses into two new LEED Gold-certified buildings, new retail space for area businesses, and open space. Amazon plans to invest more than $2.5 billion dollars in building the HQ2 campus over the next decade. The company says this will drive the creation of thousands of indirect jobs in construction, building services, hospitality, and other services.

“These buildings are the first step to creating an urban campus where our future 25,000 employees and the local community can live, work and play,” John Schoettler, Amazon VP of global real estate and facilities, said in a blog post about the planned construction.

The campus will include 1 million sq.-ft. of LEED Gold-certified energy-efficient office buildings in two 22-story towers. There will also be 50,000 sq. ft. of new retail space for shops, restaurants, and a daycare center for area residents and Amazon employees.

Other planned amenities include 1.1 acres of new public open space, including a dog park, recreation areas, and farmers’ markets. There will be space for 600 bikes in on-site bike facilities, with plans to construct a new portion of a local cycle path.

The new site also has two metro stations in close proximity, in addition to multiple bus lines and a commuter rail station.
Advertisement