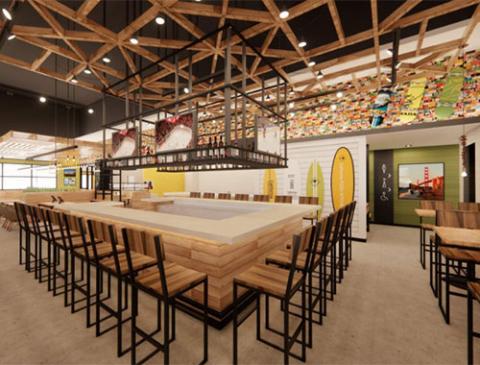 CPK chose Edmonton for its Canadian debut. The location opens on August 1.

Two years ago, California Pizza Kitchen filed for bankruptcy in the midst of COVID-19 shutdowns. Today it is back on the expansion trail.

The chain, which opened its first location in 1985, in Beverly Hills, Calif., and became renowned for the BBQ Chicken Pizza made by Spago’s pizza chef Ed LaDou,  is expanding north of the border. It will open its first restaurant in Canada on August 1, in Edmonton.

California Pizza Kitchen already operates in several foreign nations, among them Australia, India, and Japan. The August 1 opening at 5260 Windermere Boulevard NW in Edmonton is part of the brand's plan to expand across leading markets throughout North America.

Shariff and his mother Samira have been successful restaurant franchisees in Alberta for more than 25 years and will be leading further expansion efforts in the province.

Giorio Minardi, executive VP of global and franchise operations for the chain, calls the opening of the Edmonton restaurant a CPK milestone.

"The Shariffs are well-known and highly respected throughout Edmonton, and we are absolutely thrilled to partner with them as they lead California Pizza Kitchen into Canada for the first time," Minardi said.

California Pizza Kitchen has more than 240 restaurants worldwide. In December 2021, it embarked on a new strategy to expand its U.S. footprint with the launch of its first-ever domestic franchise program.