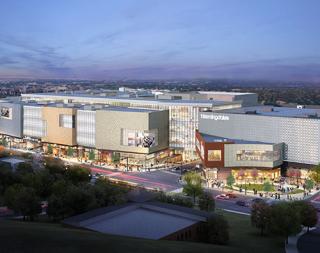 “This is pretty shocking,” announced the anchor on the local Eyewitness News broadcast in Connecticut recently. “Stores actually opened at a new mall in Norwalk.”

The SoNo Collection, so named because it actually resides in the upscale suburb of South Norwalk, is a brand new “contemporary shopping experience,” from Brookfield Properties that brings Nordstrom and Bloomingdales to Southern Connecticut.

Among the 90 tenants are Arhaus, H&M, Pink, Talbot’s, White Barn Candle, and Zara. Ebar and Bazille inside Nordstrom are the only eateries open as yet, but coming soon are Yard House, Pinstripes, Mission Ceviche, and several others.