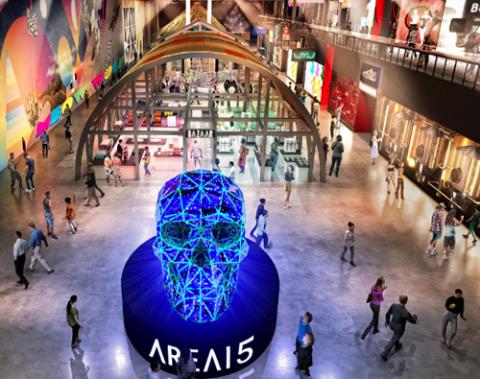 Area15, set to open in Las Vegas in April, describes itself as an “edgy, interactive, trend-ahead mall and performance complex that blurs the line between fantasy and reality.” That’s a big promise, and the property’s developers have brought in Intel to help them deliver on it.

A joint venture of Fisher Brothers real estate and the creative agency Beneville Studios, Area15 is partnering with the Silicon Valley legend on the Intel Experience Incubation Hub, a venue that will allow experiential retail professionals to test new design concepts and technologies.

Area15, located just off the Vegas Strip, plans to draw 1.7 million visitors in its first year by reimagining the mall as a totally immersive concept blending art, performances, experiential entertainment, and dining with retail. The idea is to continually update experiences for visitors so that no two visits will be the same.

“Area15 is a radical reimagining of retail, where visitors can expect to be authentically engaged and inspired in an otherworldly setting,” said Fisher Brothers partner and Area15 CEO Winston Fisher. “That’s where our collaboration with Intel comes in. Together, we’re raising the standard of experience design, and developing best practices for combining technology, art and commerce in exciting, unexpected ways.”